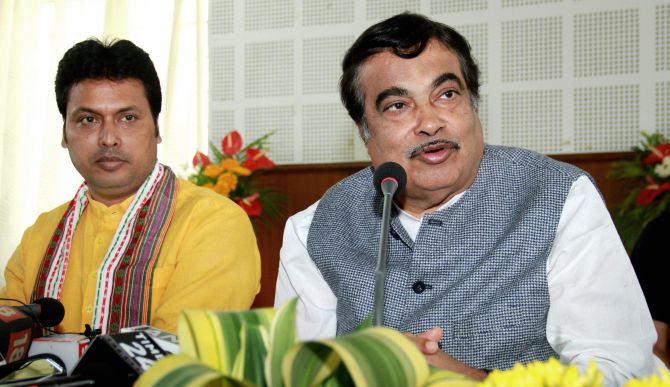 Biplab Kumar Deb, the 48-year-old Tripura BJP president, is set to take oath as the Chief Minister of the northeastern state today at a grand ceremony to be attended by Prime Minister Narendra Modi, BJP national president Amit Shah and party leaders.
In the new government, senior BJP leader Jishnu Debbarma will assist Deb as his deputy.
Born in 1969 in a middle class family in Tripura's Gomati district, in a village called Rajdhar Nagar, Biplab Deb graduated from Tripura's Udaipur College in 1999 and left for Delhi soon after to join the RSS, where he was a volunteer for 16 years, training under prominent leaders Gobinda Acharya and Krishnagopal Sharma.
Two years ago, he was called back home where he replaced Sudhindra Dasgupta, the longest-serving BJP chief in Tripura to become the youngest party chief in any state. A BJP assessment last year, the party said, showed that Biplab Deb was more popular than Manik Sarkar in Tripura.
The BJP's arrival in Tripura following a spectacular electoral victory is being seen as a humiliating defeat for the unchallenged 25-year rule of the Left.
« Back to LIVE