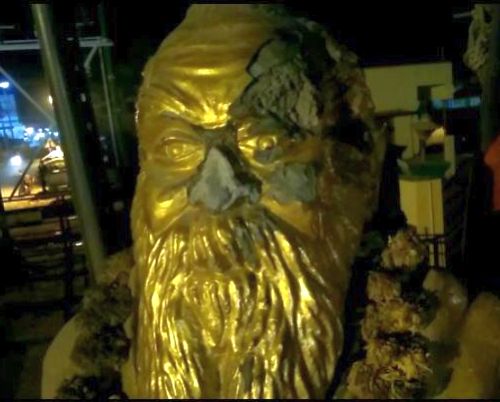 After two people were arrested at Tirupattur in Vellore district for allegedly vandalising a statue of rationalist leader E V Ramasamy, popularly known as 'Periyar', BJP leader H Raja said on Wednesday, "The post on my Facebook page was done by one of the admins without my permission. As soon as I came to know about it, I deleted the post. We have to respond through statements and opinions not through violence. It is not correct to deface statue of Periyar."
The vandalism of the statue comes against the backdrop of a row over comments made by BJP leader H Raja indicating that statues of 'Periyar' could be the next to be pulled down after a Lenin statue was razed in Tripura.
A row erupted in Tamil Nadu over H Raja's remarks indicating that statues of 'Periyar' could be the next to be pulled down.
As the comments in a Facebook post against late Ramasamy, founder of the Dravidian movement, drew condemnation from several political parties in the state, Raja deleted it while BJP's state unit distanced itself from the issue, saying it was his personal view.
Political parties including Dravida Munnetra Kazhagam, Marumalarchi Dravida Munnetra Kazhagam and the Left lashed out at Raja, a BJP national secretary, with DMK working president M K Stalin leading the charge seeking his detention under the 'Goondas Act'.
« Back to LIVE