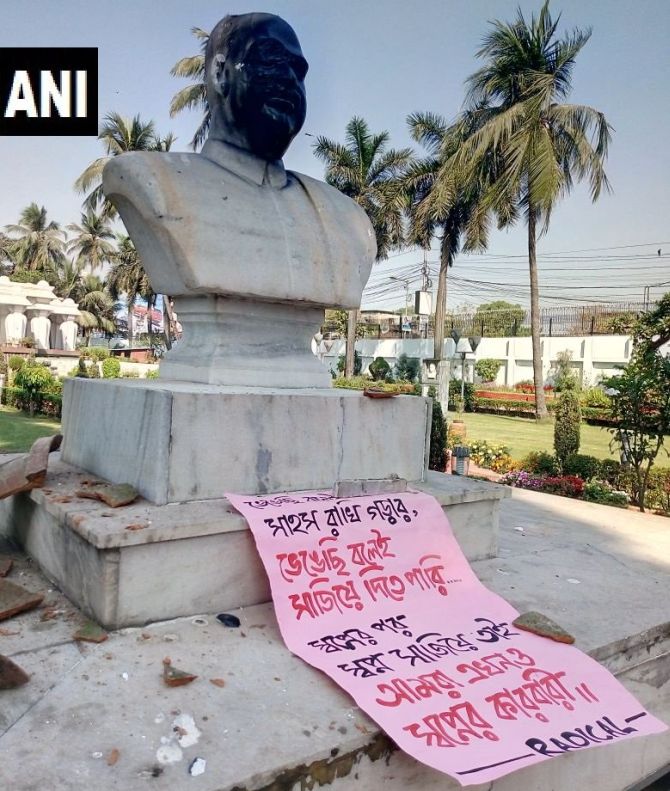 Union Home Minister Rajnath Singh today asked all political parties to ensure that those found desecrating statues are dealt with strictly and said such incidents of vandalism can never be justified.


The minister's comments came hours after the Home Ministry said it had sent an advisory to all states and Union territories to take strong action against anyone involved in the destruction of statues.


"I appeal to everyone, all parties, that anyone indulging in such acts should be dealt with strictly. These incidents can never be justified," Singh told reporters outside Parliament.


Prime Narendra Modi has expressed his strong disapproval of statues being vandalised in parts of the country and spoken to the home minister on the matter.


Two statues of Communist icon Lenin were brought down in Tripura following the BJP's emphatic win in the state over the Left, which was in power for more than 25 years. A statue of social reformer and founder of Dravidian movement E V Ramasamy Periyar was also allegedly vandalised in Tamil Nadu's Vellore district last night.


Yesterday, Singh called up Tripura Governor Tathagata Roy and DGP A K Shukla and asked them to ensure peace and check violence till a new government is installed in the state.


Union Home Secretary Rajiv Gauba had also spoken to the DGP and asked that all steps be taken to maintain law and order, check violence and restore peace and public order. The ministry said enough central and state forces were available at the disposal of the state government to tackle the situation. -- PTI
« Back to LIVE