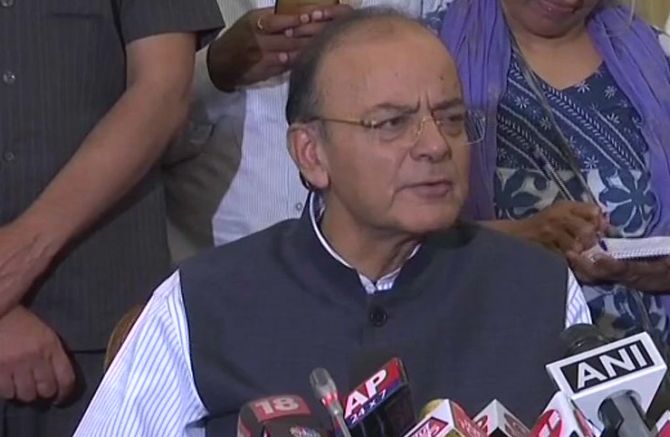 Jaitley said he agreed with the assessment that Andhra Pradesh was financially suffering after Telengana was carved out of the state and his government will honour each and every commitment made by the Centre at the time of bifurcation.

On Andhra Pradesh Chief Minister Chandrababu Naidu's demand for fulfilling the promise of giving the state a special status, he said such a category did exist when the state was bifurcated in 2014.

But after the implementation of the 14th Finance Commission recommendation, such a treatment is now constitutionally restricted to just the North Eastern and three hilly states.

The remaining funds are provided by the state governments.

For Andhra Pradesh, the Centre committed to giving 90 per cent of the funds, equivalent to special category states, through other means like external agencies, he said, adding that the Union government was even willing to accept the state government's suggestion of routing such funds through National Bank for Agriculture and Rural Development (NABARD).

At meetings last month, the Centre suggested creation of a special purpose vehicle (SPV) where NABARD could give the money so as not to upset the fiscal deficit of the state, Jaitley said, adding that the Andhra Pradesh government is yet to come back on the modalities of such transfer.

He said all the institutions promised to Andhra Pradesh at the time of bifurcation are in the process of being set up.

Asked about Congress president Rahul Gandhi's promise to give the state the special category status if his party is voted to power, Jaitley said, 'I still have to follow constitutional award' of the 14th Finance Commission.

"We are committed to giving monetary equivalent to special status to Andhra Pradesh," he said.

On meeting revenue deficit of the state, he said, the Centre has already paid Rs 4,000 crore and only Rs 138 crore remain.  -- PTI
« Back to LIVE