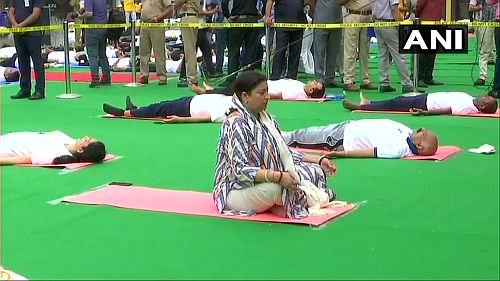 
In the joint capital of the two states, Chandigarh, Punjab Governor and the Union Territory's administrator V P Singh Badnore was the chief guest at a Yoga event in Sector 17.


Union Textile Minister Irani performed asanas along with around 4,000 enthusiasts at the event. Chandigarh MP Kirron Kher and Chandigarh unit BJP chief Sanjay Tandon were also present. In Haryana, Khattar and agriculture minister O P Dhankar rolled out their Yoga mats along with several other people, including children, at a state-level event in Jhajjar.


To mark the day, a seminar on Yoga was also organised at the Nehru Government Postgraduate College at Bahadurgarh Road, officials said. In Punjab, a state-level event was held at a sports complex in Mohali.


The day was picked by the United Nations to celebrate the ancient Indian practice and people across the country today marked the fourth International Day for Yoga. -- PTI
« Back to LIVE