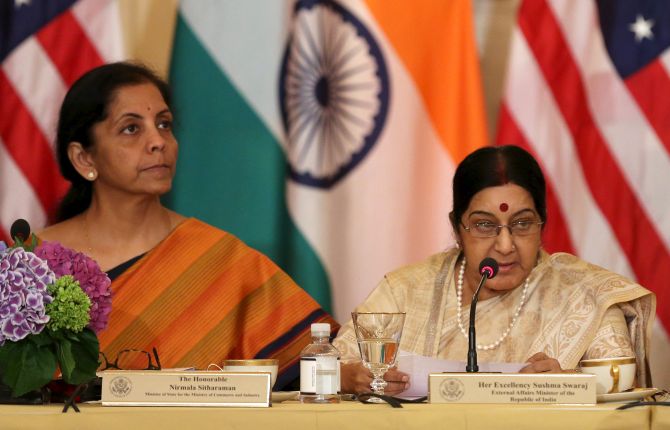 The first India-United States '2+2 dialogue' will be held on July 6 and External Affairs Minister Sushma Swaraj and Defence Minister Nirmala Sitharaman will travel to the US to take part in the meeting that is likely to focus on strengthening strategic and defence ties.
The two sides are expected to share perspectives on strengthening their strategic and security ties and exchange views on a range of bilateral, regional and global issues of mutual interest, the Ministry of External Affairs (MEA) said in a statement.
Swaraj and Sitharaman will take part in the first meeting of the '2+2 Dialogue' with US Secretary of State Michael R Pompeo and Secretary of Defence James N Mattis on July 6, it said.
This new dialogue format was agreed upon between the two sides during the visit of Prime Minister Narendra Modi to Washington in June 2017.
The meeting will focus on strengthening strategic, security, and defence cooperation as the US and India jointly confront global challenges, according to the US State Department.
Earlier this year, the '2+2 dialogue' had been postponed due to uncertainty over the confirmation of Mike Pompeo as President Donald Trump's new Secretary of State.
Pompeo was later confirmed as Secretary of State in April. The dialogue is seen as a vehicle to elevate the strategic relationship between the two countries.  -- PTI
Photograph: Reuters
« Back to LIVE