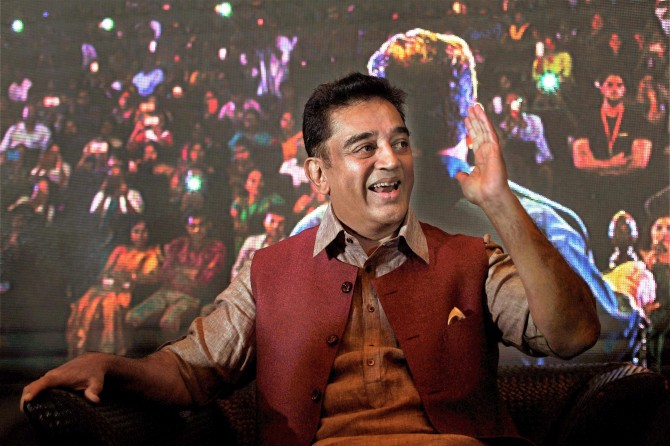 Makkal Needhi Maiam president Kamal Haasan today met United Progressive Alliance chairperson Sonia Gandhi in New Delhi and discussed the current political situation in Tamil Nadu.
The actor-turned-politician had yesterday met Congress president Rahul Gandhi at his residence and held similar discussions with him.
"I have met Sonia Gandhi and we discussed the political situation in Tamil Nadu... It was a general talk," he told reporters after the meeting.
The attempt is seen as part of the Congress's efforts to bring together all opposition parties under one platform to take on and defeat the Bharatiya Janata Party in the next general elections.
On whether he would support the Congress in this endeavour to bring opposition parties together under one common platform, Haasan said, "It is to early to speak of those things."
He termed it as a courtesy meeting and said he was meeting them 'like a family' as he had personal ties with the Gandhi family.
The MNM chief said he had met Rahul and other opposition leaders in Bengaluru at the swearing-in of H D Kumaraswamy as Karnataka chief minister.
Haasan met Sonia at her 10, Janpath residence in New Delhi.  -- PTI
« Back to LIVE