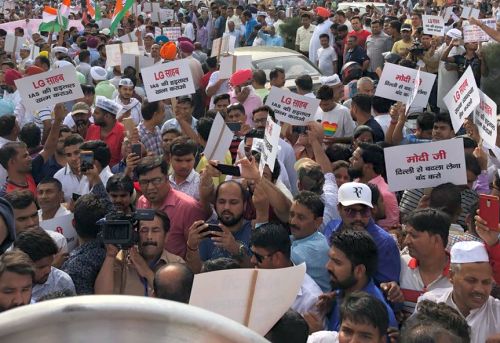 Thousands of Aam Aadmi Party supporters have assembled at Mandi House to march towards the PMO to support Chief Minister Arvind Kejriwal and his ministers' sit-in at the lieutenant governor's office for the last seven days in their fight against  the "dictatorship" of Modi government.
However, the Delhi Police had said that the Kejriwal-led party hasn't sought permission for the march.
The police said that exits of several metro stations -- Patel Chowk, Udgyog Bhavan, Central Secretariat, Janpath and Lok Kalyan Marg -- have been shut.
Ahead of the march, the Communist Party of India-Marxist lent its support to Kejriwal's dharna.
CPI-M general secretory Sitaram Yechury tweeted: "Joining the protest rally to the Prime Minister's residence today to express serious condemnation over the manner in which federalism, a fundamental feature of our Constitution, is being undermined by this BJP Central government."
« Back to LIVE