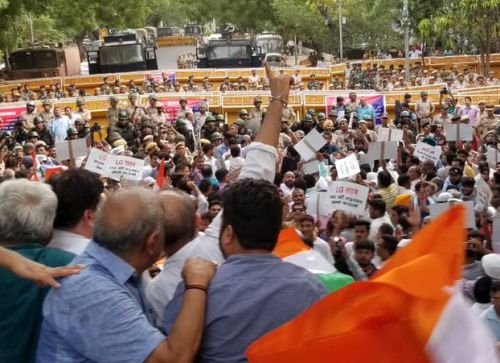 The Delhi police have stopped Aam Aadmi Party's protest march to the Prime Minister's Office at Parliament Street.
Madhur Verma, Deputy Commissioner of Police, New Delhi, told ANI that Aam Aadmi Party hasn't sought for any permission for the march and they're being told that they can't go any further.
"They don't have permission (for protest march). They've been contained at Parliament Street. They're being told that they can't go any further. Specially trained personnel are deployed here. We're sure they will (protesters) listen to us," Verma said.
The march which began around 5 pm is in support of Chief Minister Arvind Kejriwal and three of his cabinet colleagues, who have been holding a sit-in at the LG office for the last one week, demanding that Lt Governor Anil Baijal direct IAS officers to end their "strike".
Meanwhile, tight security arrangements have been made by the Delhi Police as huge crowd is now assembling at Parliament Street.
« Back to LIVE