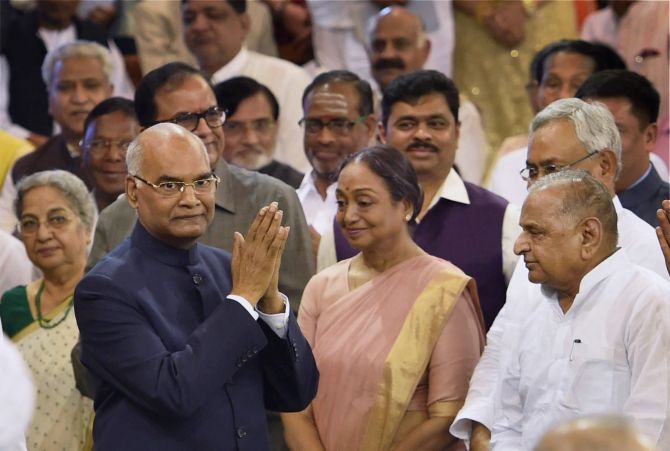 President Ram Nath Kovind has rejected his first mercy petition of a death-row convict who had burned alive seven members of a family, including five children, over a case of buffalo theft.
The case pertains to gruesome killing of Vijendra Mahto and six of his family members by Jagat Rai in Raghopur block of Bihar's Vaishali district in 2006.
Mahto had lodged a case of theft of his buffalo in September 2005 in which Rai, Wazir Rai and Ajay Rai were named as accused.
The accused (now convicts) were pressuring Mahto to withdraw the case.
Rai had set on fire Mahto's house that resulted in the death of latter's wife and five children.
Mahto, who had sustained serious burn injuries then, died after few months.
After being convicted for the crime and being awarded the death penalty by the local court, the high court and the Supreme Court in 2013 too gave their nod for the hanging. Rai's mercy plea was then sent to the president's secretariat.
The office of the president had sought the Home Ministry's views which gave its recommendation on July 12 last year.
"The mercy petition (of Mahto) was rejected by the president on April 23, 2018', according to a Rashtrapati Bhavan communique.
This is the first mercy plea decided by Kovind after he became the president in July last year.
There is no other mercy petition pending with the president's secretariat. -- PTI
« Back to LIVE