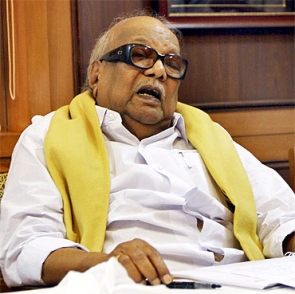 Dravida Munnetra Kazhagam President M Karunanidhi turned 95  today with a host of leaders including Prime Minister Narendra Modi and Congress President Rahul Gandhi extending their greetings.
The veteran politician's Gopalapuram residence was decked with flowers as scores of party cadres began to converge since last night and cut a cake to mark the occasion.
Sweets were distributed among party workers and a host of events including blood donation camp were held by the party in various places.
DMK Working President and his son M K Stalin and former Union Minister A Raja were among those who met Karunanidhi early in the day.
The nonagenarian leader had undergone tracheotomy procedure last year to improve breathing.
A smiling Karunanidhi made a brief appearance on the threshold of his house and waved to the waiting crowd.
DMK supporters who had gathered outside the residence raised slogans hailing him.
Prime Minister Modi, Congress President Rahul Gandhi, West Bengal Chief Minister Mamata Banerjee were among those who greeted the Dravidian leader.
Modi, who called on Karunanidhi in November last year athis residence here, extended his greetings on social networking site Twitter and shared an image of his meeting with the DMK veteran.
"Best wishes to Kalaignar M Karunanidhi Ji on is birthday. A prolific writer, poet, thinker and orator, Karunanidhi Ji is one of the India's senior most political leaders."
"May he be blessed with a long and healthy life@kalaignar89," Modi tweeted.
The Congress President also extended his birthday greetings in Twitter saying, "I would like to wish Shri Karunanidhi ji a very happy birthday! I pray for his good health and happiness, always."
On her Twitter handle, Mamata Banerjee said, "Warmest birthday greetings to M Karunanidhi @kalaignar89 Ji. I pray for your good health and happiness."
The DMK supremo was first elected to the state assembly from Kulithalai in then undivided Tiruchirappalli in 1957.
He has not lost a single election he contested in his six-decade long career.  -- PTI
« Back to LIVE