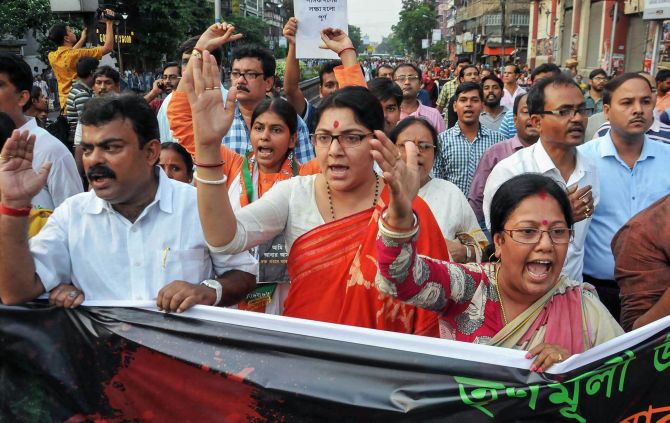 The West Bengal police suggests that 35-year-old Dulal Kumar, who was found hanging in Purulia on Saturday, and whom the Bharatiya Janata Party claimed to be its worker, had allegedly committed suicide.
"We received post mortem reports, which state 'death due to asphyxia, hanging ante mortem and suicidal ingestion,' Purulia Superintendent of Police Akash Magharia said.
"We're taking formal action," he said.
Dulal's body was found two days after the body of another man, Trilochon Mahato, 20, who the BJP said was a member of its youth wing, was found hanging from a tree in Balarampur village of Purulia district.
A note was recovered from his body which said he 'was killed because he worked for the BJP'.
"The other case (of Trilochan Mahato) is heading in right direction too. The state government has handed it over to the CID," Magharia said.
Magharia replaced Joy Biswas as Purulia SP, who was transferred by the government in wake of the two incidents.
The BJP alleged the deaths were 'political murders' and demanded a Central Bureau of Investigation inquiry into the two incidents.  -- With inputs from ANI and PTI
IMAGE: BJP Mahila Morcha president Locket Chatterjee , centre, participated in a rally with party's Yuva Morcha activists against alleged killing of BJP's Trilochan Mahato and Dulal Kumar in Purulia. Photograph: PTI Photo
« Back to LIVE