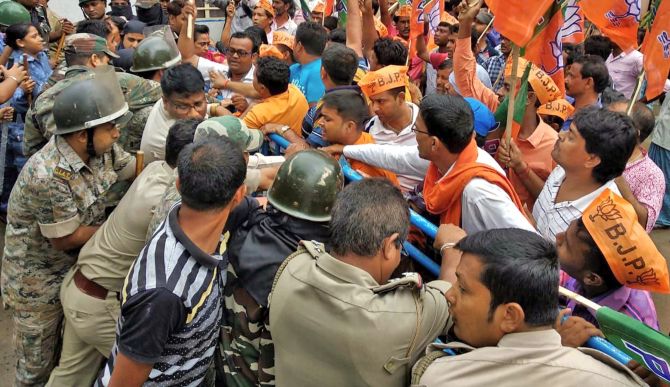 The body of a 35-year-old man was today found hanging from a high-tension tower in Purulia, triggering protests by locals, police said.
The incident comes two days after the BJP claimed that its worker Trilochon Mahato (20), who was found hanging from a tree at Balarampur in the district on May 30, was killed by the TMC. However, the Trinamool Congress has denied the allegations and termed it as baseless.
The West Bengal government today ordered a criminal investigation department probe into Mahato's death, ADG Law and order Anuj Sharma said.
The body of Dulal Kumar was found hanging from a tree near a field in Daha village under the same police station area this morning, said Superintendent of Police Joy Biswas.
Kumar's death triggered an uproar among the locals who put up demonstrations outside the Balarampur police station, demanding immediate arrest of the culprits.
-- PTI
« Back to LIVE