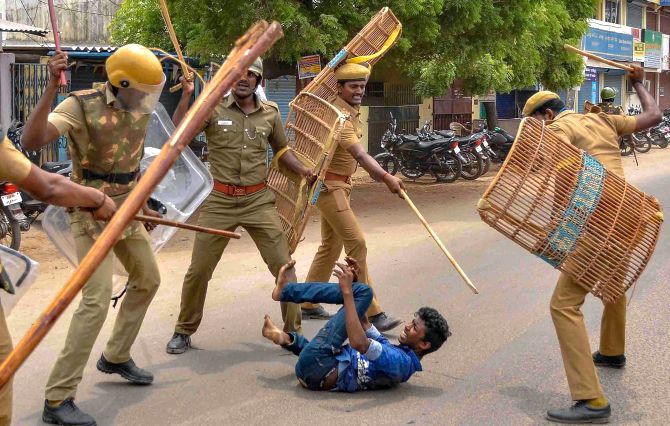 The Madras high court on Friday directed the Tamil Nadu government to explain the circumstances in which police opened fire during protests in the southern port city of Tuticorin, killing 13 people.
Chief Minister Edappadi K Palaniswami's administration needs to reply by next Wednesday -- June 6.
The HC's Madurai bench issued the directive after it received a petition demanding the registration of a murder case against the state police chief, as well as the formation of a special investigation team.
The target of public ire was a Sterlite copper smelter owned by the London-listed firm Vedanta resources -- a plant which locals and environment activists have long wanted closed. They cite air and water pollution -- but Vedanta denies the accusations.
When the protests turned violent last week, and civilians died as a result of police action, Chief Minister Palaniswami defended law enforcement authorities.
"When someone hits you, you naturally tend to defend yourselves. So [in] such situations, no one acts in a pre-planned manner," he said in the first of a series of tweets.
The state government ordered the permanent closure of the plant on Monday. Vedanta was preparing a legal challenge to the shutdown, Reuters reported a day later.
« Back to LIVE