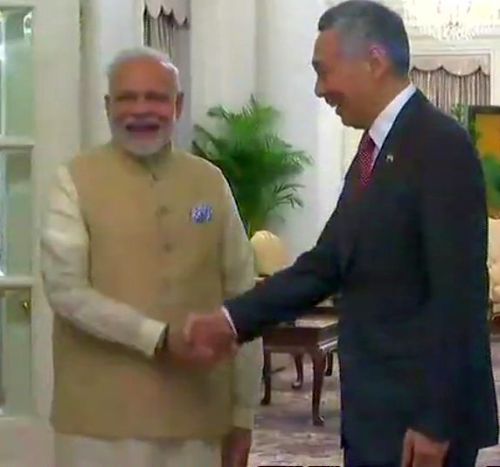 Prime Minister Narendra Modi today met his Singaporean counterpart Lee Hsien Loong and discussed bilateral ties.
Modi, who arrived in Singapore on a three-day visit, also called on Singapore President Halimah Yacob.
After his arrival at the presidential palace Istana, he was accorded a ceremonial welcome.
"Prime Minister Modi was accorded a ceremonial welcome on his arrival at Istana - Presidential Palace of Singapore. Millennia old ties now powered by partnership in innovation and technology," said Raveesh Kumar, Spokesperson of the ministry of external affairs.
Modi received a 'guard of honour' at the palace.
During his talks  with Singaporean leaders, Modi discussed ways to further strengthen bilateral ties.
Modi is in Singapore on the last leg of his three-nation tour. He earlier visited Indonesia and Malaysia.
-- PTI
« Back to LIVE