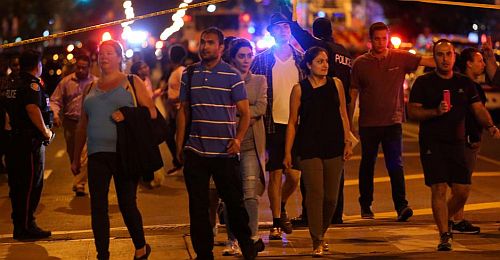 Faisal Hussain, the 29-year-old shooter responsible for the rampage in Toronto's Greektown neighbourhood, was from Pakistan's Jhelum.


Files, being reviewed by the police, include concerns that Hussain expressed "support" for a website that was seen as "pro-ISIL," says a law enforcement source.


Sources say Toronto police and the Canadian Security Intelligence Service (CSIS) officials in Ottawa, as well as the Royal Canadian Mounted Police (RCMP), are looking into his past, which sources say, include his residence in Afghanistan and Pakistan.


Hussain apparently had been spoken-to by authorities about his online activities. Sources say Toronto Police, the Ontario Provincial Police and the RCMP have all had an interest in the now-deceased alleged shooter.


What law enforcement agencies are saying is that the attack was planned, and Hussain was "well known to Toronto Police" for investigations into past crimes "involving weapons and violence."According to sources quoted by the Canadian media house Global News, Hussain's family had been going through major challenges.


Hussain lost his sister to a car accident, while his brother was hospitalised following a stroke. He also struggled with mental health issues since 2010, as confirmed by Hussain's parents."We are at a terrible loss for words but we must speak out to express our deepest condolences to the families who are now suffering on account of our son's horrific actions. Our hearts are in pieces for the victims and for our city as we all come to grips with this terrible tragedy. We will mourn those who were lost for the rest of our lives," a statement from the Hussain family, quoted by Global News, read.


"Our son had severe mental health challenges, struggling with psychosis and depression his entire life. The interventions of professionals were unsuccessful. Medications and therapy were unable to treat him. While we did our best to seek help for him throughout his life of struggle and pain, we could never imagine that this would be his devastating and destructive end," the statement added.


Toronto Chief of Police, Mark Saunders said a girl aged 10-years and a young woman of 18-years were killed in the shooting that took place at Greektown (Danforth) neighbourhood in the city, while at least 13 others were left injured. -- ANI


Image: People leave the site of the mass shooting in Toronto. Reuters/Chris Helgren.
« Back to LIVE