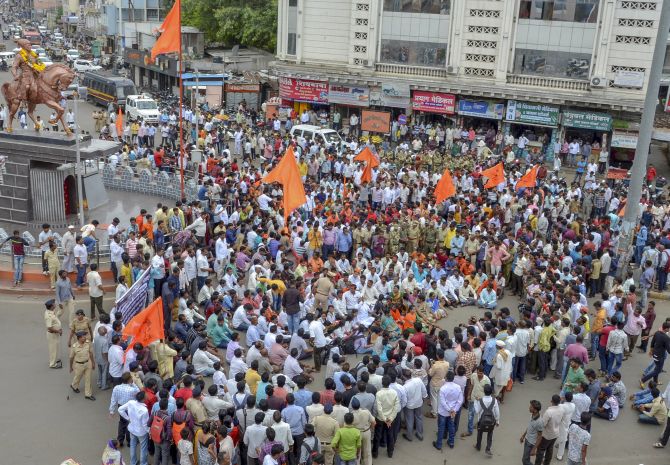 Maratha outfits in the state have called for a bandh in Mumbai, Thane and Navi Mumbai, and several other areas of the state on Wednesday.
The decision was taken at a meeting of Maratha organisations at Shivaji Mandir in Mumbai on Tuesday afternoon. The Maratha Kranti Morcha, an umbrella body of various community groups, announced the bandh.
The Marathas have been agitating for reservation for the community in government jobs and education for a while now.
The organisation has appealed to community members to observe the bandh peacefully. Essential services have been exempted from the bandh, it added.
The shutdown will be observed in Mumbai, Thane, Navi Mumbai, Palghar, Raigad and Satara.
NCP MLA Narendra Patil, who has been part of protest marches in Mumbai, Thane and Navi Mumbai, said the bandh will be observed in all three cities on Wednesday. We had a meeting of various organisations in Navi Mumbai in Tuesday and decided to observe the bandh in the three districts tomorrow, he said. The decision to call for Maharashtra bandh was taken very late on Monday in Aurangabad, and gave us very little time to prepare. By observing the bandh, we are extending our support to protests being staged at various places.
« Back to LIVE