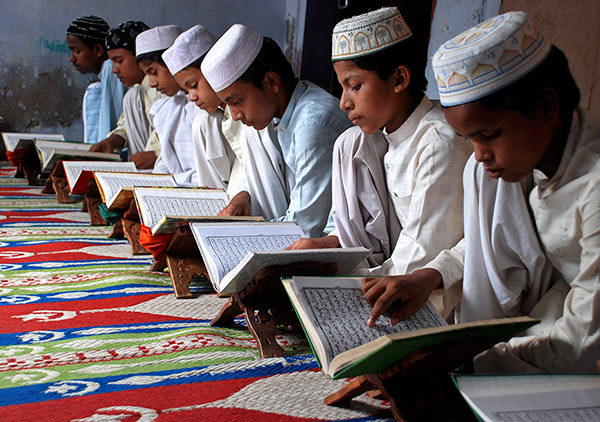 After introducing modern education in madrasas, the Yogi Adityanath government has mooted a new dress code for madrasa students to end their 'demarcation' from other school pupils.
The state government is yet to disclose the new dress code for madrasa students, but said it might also fund it.
"The aim of the UP government is to bring madrasas at par with other educational institutions in every sense. Till now, students in madrasas have been wearing 'kurta-payjamas' but now this dress code will make it more formal... We might also try to meet the expenses," said State Minister for Muslim Waqf and Haj Mohsin Raza in Lucknow today.
Stressing that it is only the Bharatiya Janata Party-led governments which have doing justice with the minorities, the minister said the other political parties have been considering them as only a vote-bank.
Raza said the current dressing style of madarsa students reflects a clear demarcation between them and the students of other schools which will come to an end now.
The state government has already gone ahead with its plans to introduce NCERT books in the madrasas of Uttar Pradesh in a bid to bring their students at par with their counterparts in other schools and to modernise the education in madarsas affiliated to the State Madarsa Board.
"Till now, students in madrasas wear white kurta-pyjama, which reflects a particular faith. We will very soon propose a new dress code for them," the minister said. He, however, refused to elaborate as to what the new dress code would be.
"Our intentions are absolutely clear as we work with transparency and believe in sabka saath, sabka vikas," he said adding that the prime minister wanted to integrate the Muslim society with the country's mainstream with a Quran in one hand and a laptop in the other.
"Madarsa students are already availing religious education, we are not going to hamper it, we are only going to impart them social education to integrate them with the country's mainstream and help them go to the IIMs or the IITs and clear competitive examinations," he said.  -- PTI
« Back to LIVE