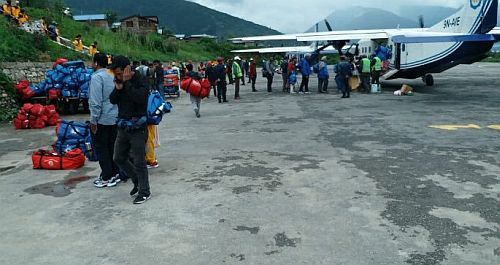 And more on Ms Swaraj.


External Affairs Minister Sushma Swaraj on Tuesday said that the ministry has requested the Government of Nepal to provide their army helicopters in evacuating stranded Indian nationals along the route of the Kailash Manasarovar Yatra.


"We have requested Government of Nepal for army helicopters to evacuate stranded Indian nationals. #IndiansStrandedInNepal," Swaraj said on Twitter.


In a series of tweets, Swaraj said that the Indian Embassy in Nepal has deployed representatives in Nepalganj and Simikot to provide help to the stranded pilgrims at Kailash Mansarovar Yatra.


"Indian Embassy in Nepal has deployed representatives in Nepalganj and Simikot. They are touch with the pilgrims and ensuring that food and lodging facilities are available to all the pilgrims," Swaraj said.


The minister also confirmed that about 525 pilgrims are stranded in Simikot, 550 in Hilsa and another 500 in Tibet side.


She further assured people that the concerned officials are in constant touch with the pilgrims while also ensuring that food and lodging facilities should be available to all.


Meanwhile, a proper medical help is being provided to the needy in Simikot, she added. "In Simikot a health check up has been done on all the elderly pilgrims. They are being provided required medical help. In Hilsa we have requested police authorities for necessary assistance," she added.


The Embassy of India in Kathmandu has assured all possible support to pilgrims stranded in Nepal following a heavy downpour. The embassy has stationed its representatives in Nepal's Nepalganj and Simikot, who are personally in touch with all the stranded pilgrims and have ensured arrangements for best possible stay and availability of food and water.


According to the sources, the local airlines operating in the route have been requested to ensure availability of extra aircrafts to have maximum possible sorties as soon as the weather clears up so that all stranded pilgrims can be taken back home.


The mission is also looking at the possibility of helicopter evacuation for critical cases.


Nearly 250 pilgrims from Karnataka are stranded in Nepal's Simikot after heavy rains caused landslips along the route of the Kailash Manasarovar Yatra.


A tourist from Andhra Pradesh's East Godavari district, Granthi Subbarao, passed away in Nepal's Hilsa. His body is being brought to Nepalgunj. The body will be sent to his hometown in AP after a post mortem.


Thousands of Indian pilgrims take part in the Kailash Mansarovar Yatra every year via Nepal in the Tibetan Autonomous Region of China ahead of monsoon season.


The tour is organised by the Ministry of External Affairs each year between June and September in cooperation with the government of People's Republic of China through two different routes - Lipulekh Pass (Uttarakhand) and Nathu La Pass (Sikkim).


Image: Two commercial flights landed at Simikot to rescue 525 pilgrims of the Kailash Mansarovar Yatra stranded in the area. Pic: ANI
« Back to LIVE