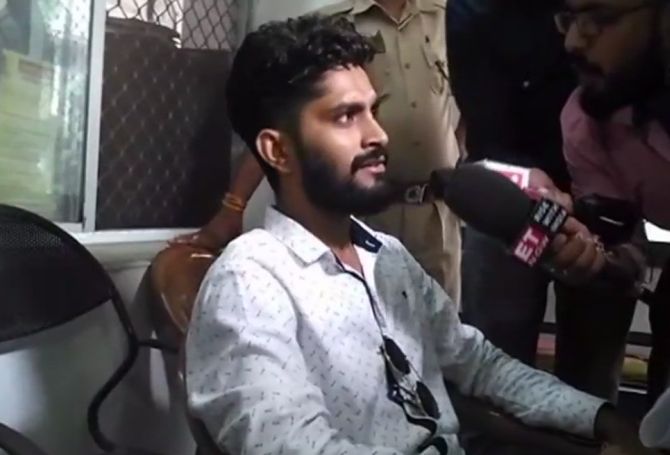 A Bharatiya Janata Party legislator's son who was caught on camera thrashing a car driver presented himself before the police today, tendering an apology over the road rage incident which embarrassed the party in Rajasthan.
Hours earlier, the Bhanswara MLA had apologised on his son's behalf over the incident which took place a month ago.
"The victim submitted in writing that as MLA Dhan Singh Rawat's son has apologised for the incident he does not want to lodge a complaint against him," Banswara Kotwali SHO Shaitan Singh said.
The police had summoned the legislator's son Rajveer Rawat and the victim for questioning, Banswara superintendent of police Kaluram Rawat said.
No police complaint has been lodged by the victim after the incident last month. But the party faced embarrassment after the video clip of the violence surfaced recently on social media.
The MLA initially called it a 'petty matter', which would be settled by the 'children' themselves.
But he withdrew his remarks today as the clip went viral.
"I am in favour of action being taken in the matter. It is a serious matter and not a matter among children. I apologise on behalf of my son and seek an apology from the people of Banswara," the MLA said.
Rawat said he will also ask his son to 'surrender' before the police.
On June 1, Rawat's son had pulled a man driving a car out of his vehicle in Bansara's Vidhyut Colony area, the video appeared to show.
He and his aides are then seen thrashing the driver, allegedly for not giving way to his car.
Earlier, Rajasthan Chief Minister Vasundhara Raje and state Home Minister Gulab Chand Kataria assured that the matter would be looked into.
Kataria said it would be investigated and the VIP status of the man's father will not come in the way of justice.  -- PTI
« Back to LIVE