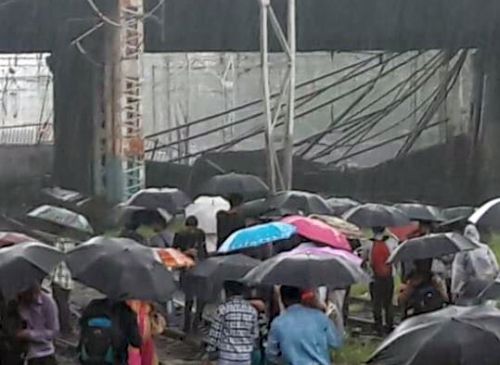 A part of a footover bridge has collapsed at Mumbai's Andheri area around 7.30 am.
No casualties have been reported.
As of now, all trains have been stopped on the western line.
Four fire tenders have been rushed to the spot.  An official from the Mumbai Fire Brigade has said, "It's part of Gokhale bridge that connects Andheri east & Andhari west. We are at the spot & trying to check with the locals if some one is missing as they might be trapped under the debris."
Mumbai in has been recieving continuous heavy rains since Monday evening. The Indian Meteorological Department has forecast heavy rain in parts of Mumbai and Thane on Tuesday and Wednesday as well. The IMD said rainfall is expected through the week.
The heavy rains have once again left Mumbaikars vulnerable with reports of water-logging slow traffic movement being reported from several parts of the city. Overflowing drains are only adding to the problem as Mumbai wakes up to another rainy day.
« Back to LIVE