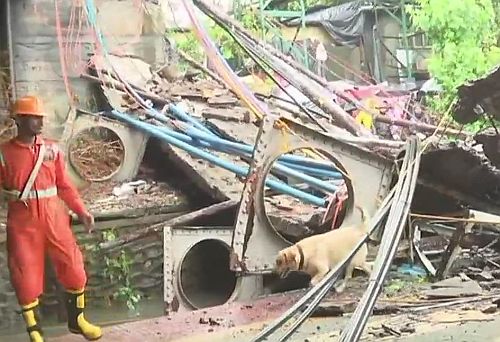 Andheri bridge collapse: A NDRF team with a dog squad is present at the spot. Two people have been rescued from under the debris so far. A total of six people have been injured even as rescue operation are underway.


Train services on the Western Railway, which had come to a complete halt after the footover bridge collapsed this morning, have partially resumed. Trains are running between Churchgate and Bandra and Virar and Goregaon.


The Western Railway, in a tweet, has requested commuters to travel on WR only when very necessary. "Limited services being run between Borivali-Goregaon. However, 18 extra buses have been arranged from Borivali for south Mumbai. More extra buses being arranged.Trains working bet Virar-Borivali ," @WesternRly said in a tweet.


The WR has also been distributing food packets and water bottles for stranded passengers in long-distance trains.


No casualties were immediately reported. Overhead Equipment have been damaged and a team of engineers have swung into action to restore it, chief PRO of Western Railway Ravinder Bhakar told PTI.


" Our officers have reached to the spot and accessing the situation," he said. An official from Disaster Management Unit said that fire brigade jawans and other agencies have been mobilised to clear the debris.


"Around 7.30 am, the part of East Western Railway FOB fell down towards Andheri east station. Fire brigade, Mumbai police and ward staff have rushed to the spot," said the official adding no casualty was reported so far.


He also said that it seems that incessant rain caused cracks in the FOB, which later resulted in the collapse. Thankfully, no train was passing beneath the track," he added.


Meanwhile, the stoppage of the Western Railway suburban services have paralysed the city. Prashant Ghag, who works in media house at Fort said, "When I reached Borivili to board a Churchgate bound train, I came to know that all the lines of Western Railway have come to halt. Therefore, finding no alternate means of commute in such a rainy season, I had to return at my home." Dabbawalas, who supply Tiffin boxes to the working professionals, have also expressed their inability to work today, as the all the four lines of the Western Railway suburban services have come to halt. -- PTI


Image: A NDRF team at the bridge collapse site.
« Back to LIVE