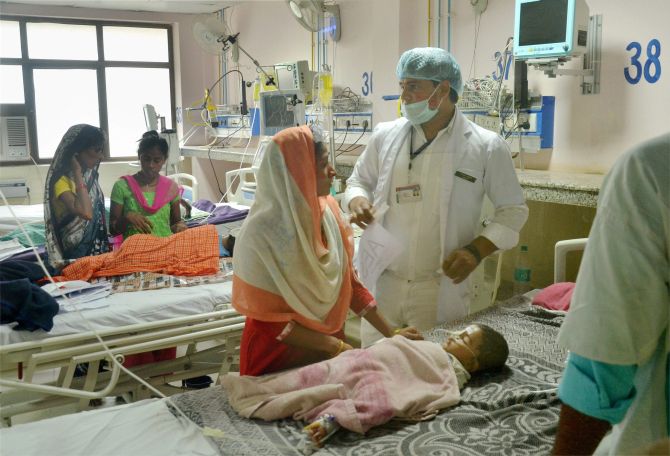 A major fire today gutted the principal's office and an adjacent record room of the state-run Baba Raghav Das Hospital in Gorakhpur, the fire department said.

No loss of life has been reported, but the fire destroyed important documents in the record room of Baba Raghav Das Medical College, which was in the news last year after scores of infants died at the facility.

While the police said it seems that short circuit may be the cause of the fire, a local Samajwadi Party leader described the blaze as mysterious and sought a probe into why only vital files were destroyed.

"Prima facie, it seems that the fire was caused by a short circuit," SP (North) Ganesh Saha said.

Chief Fire Service Officer T K Singh said a committee has been constituted to probe the reasons behind the fire.

Six fire tenders took nearly an hour to bring the blaze under control.

Describing the fire as mysterious, SP district chief Prahlad Yadav suspected that it was an act of sabotage to destroy vital documents related to provision of oxygen to the hospital and files pertaining to its shortage in supply that led to deaths of so many children last year.

He alleged that officials reached the spot late though their attention was drawn to the blaze as soon as flames were noticed by the people there.

"It should be probed as to how and why only important files were reduced to ashes," Yadav said.

The BRD Medical College had hit the headlines in August last year when 63 children, including infants, died within a span of four days when the supply of oxygen was allegedly disrupted due to non-payment of dues to the vendor.

The state government had, however, vehemently denied that shortage of oxygen led to the deaths.  -- PTI

Image used only for representation.
« Back to LIVE