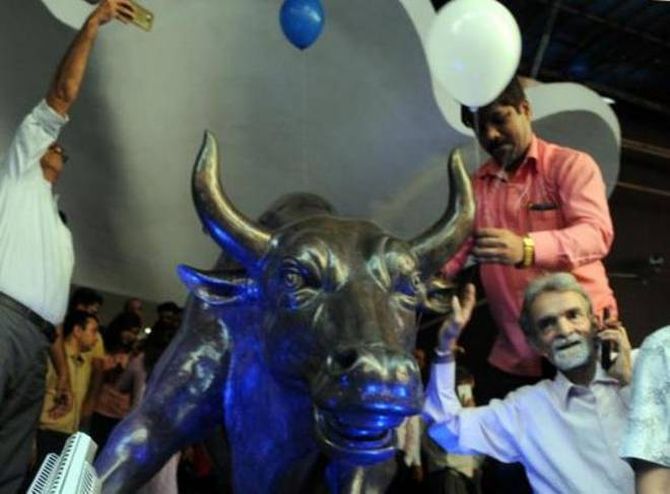 Stocks rose to fresh life-time closing high levels on optimism over earnings, growth and budget, with the benchmark BSE Sensex jumping by 199 points to end at record 34,352.79.
The broader NSE Nifty for the first time closed above 10,600 mark after consistent buying by domestic and foreign investors.
Gains in key IT, capital goods, healthcare and metal stocks helped both the key indices to scale new peaks.
The 30-share Sensex continued its upward march to touch a new intra-day record high of 34,385.67, surpassing its previous high of 34,188.85 hit on January 5.
But it lost some ground due to profit-booking and settled at a new closing peak of 34,352.79, up 198.94 points, or 0.58 per cent. The Sensex bettered its previous record of 34,153.85 touched on January 5.
In last two days, the index has gained 360.47 points.
Similarly, the broader 50-issue NSE Nifty hit a new intra-day high of 10,631.20, smashing its previous record of 10,566.10 hit on January 5.
However, it shed some grounds to close at 10,623.60, still a new closing high, up by 64.75 points or 0.61 per cent. It broke the previous record of 10,558.85 reached on January 5.
Traders said sentiment remained upbeat on continuous foreign fund inflows and unbated buying by investors amid expectations of encouraging quarterly earnings and hopes of growth-oriented budget next month.
Firm global cues with most other Asian markets rising with the corporate earnings season about to kick off amid more records on Wall Street, too positively impacted on the domestic bourses. -- PTI
« Back to LIVE