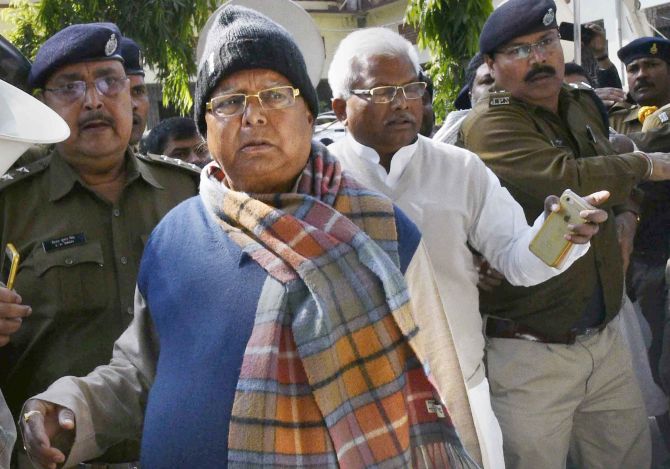 Rashtriya Janata Dal supremo Lalu Prasad Yadav, who is lodged in a jail in Ranchi after his conviction by a Central Bureau of Investigation court in a fodder scam case, would move the Jharkhand high court for bail within the next few days, his lawyer said.

Yadav's lawyer Prabhat Kumar told PTI that his lawyers will move the high court either on Friday or next Monday.

An official of Birsa Munda Central jail said certified copies of the CBI court's judgment sentencing the 16 fodder scam convicts, including Yadav, were handed over to them on Saturday.

Replying to a query on whether the RJD chief would move the court for parole following his sister's death, Kumar said it was not under consideration.

"No, it is not under consideration," the lawyer said.

Yadav was sentenced to three-and-a-half years in jail by the CBI court on January 6 for fraudulent withdrawl from Deoghar treasury between 1990 and 1994 when he was the Bihar chief minister.

The jail official remained tightlipped when asked about the varcity of reports that RJD supremo has been given the job of a gardener in the jail with his daily wage being Rs 93.

"We cannot tell that," he said, adding that a job is allotted according to the requirement of the jail and not the wish of an inmate.

Kumar said he was not informed about the kind of job Yadav has been asked to do.   -- PTI