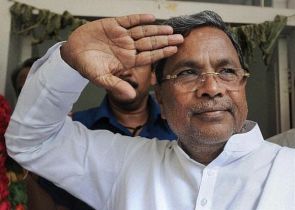 Escalating attack on his Uttar Pradesh counterpart Yogi Adityanath, Karnataka Chief Minister Siddaramaiah on Monday dubbed him a 'Jungle Raj' chief minister, as both were locked in a Twitter war that went viral.

A day after Adityanath mocked at Siddaramaiah's assertion about his Hindu credentials, the Karnataka chief minister said the Hindutva he follows was the legacy of Swami Vivekananda and not Nathuram Godse, assassin of Mahatma Gandhi.

'Ours is a Hindutva that follows the legacy of Vivekananda, not Godse. Let Chief Minister Yogi Adityanath read what Vivekanada has said before lecturing us about ban on cow slaughter,' Siddaramaiah said in a tweet in Kannada.

Speaking at the 'Nava Karnataka Parivartan Yatre' rally organised by the Karnataka unit of the Bharatiya Janata Party in Bengaluru yesterday, the Uttar Pradesh Chief Minister took a jibe at Siddaramaiah, saying he was only now recalling his Hindu roots.

Siddaramaiah calls himself a Hindu just as Congress President Rahul Gandhi went to temple after temple during the Gujarat assembly elections, he had claimed adding that 'calling himself a Hindu will not suffice till he continues toendorse eating beef'.

Assembly elections are due in Karnataka, early this year.

This was the second such visit by Adityanath to the statein a month to campaign for the party.

He had last visited toaddresses a similar rally in Hubballi.

Calling Adityanath 'a Jungle Raj chief minister' while speaking to reporters at Byndoor in Udupi district today, Siddaramaiah said, "We need not learn from him."

The fresh salvo from Siddaramaiah came after both engagedin the Twitter war.

Welcoming Adityanath to Bengaluru, Siddaramaiah tweeted that there's a lot he can learn from Karnataka to address there ported starvation deaths in his state.

'I welcome UP CM Shri @myogiadityanath to our state. There is a lot you can learn from us Sir. When you are here please visit an Indira Canteen & a ration shop. It will help you address the starvation deaths sometimes reported from your state. #YogiInBengaluru,' Siddaramaiah tweeted.

Adityanath promptly responded. Thanking Siddaramaiah for the welcome, he cited anincrease in farmers' suicides and alleged ill treatment to honest government officials under the Congress dispensation.

He also pointed out that he was trying to 'undo the misery' unleashed by Congress' allies in Uttar Pradesh.

'Thank you for the welcome @siddaramaiah ji. I heard number of farmers committing suicide in Karnataka was highest in your regime, not to mention the numerous deaths and transfer of honest officers.'

'As UP CM I am working to undo the misery and lawlessness unleashed by your allies,' Adityanath tweeted.

The 'welcome' barb between both the chief ministers has gone viral, with supporters of political parties they represent taking sides and trolling each other with hashtags '#YogiInBengaluru' and '#HogappaYogi' (go Yogi).

In another tweet late in the evening today, Siddaramaiah asked as to who the BJP people were to question food habits but added that he doesn't eat beef because he doesn't like it.

He also said he had reared cows and asked whether Adityanath who lectures about cow protection had done the same.  --PTI