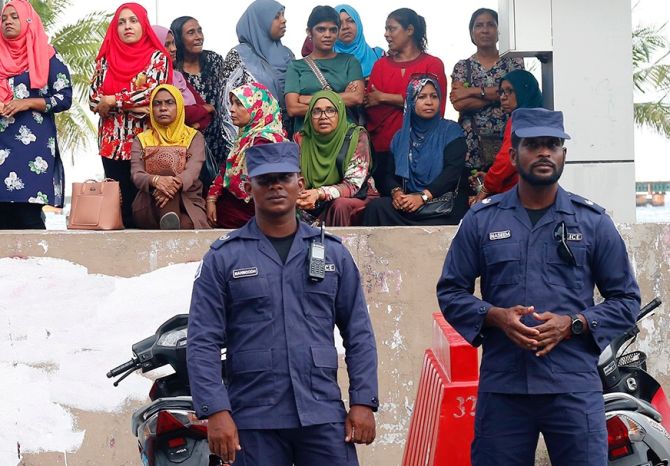 The United States today called on Maldives President Abdulla Yameen to ensure the proper functioning of the Parliament and restore constitutionally guaranteed rights of the people and institutions in the country.

"The US calls on President Yameen, the army, and police to comply with the rule of law, implement the Supreme Court's lawful ruling, ensure the full and proper functioning of the Parliament, and restore constitutionally guaranteed rights of the people and institutions of Maldives," a State Department spokesperson told PTI.

He was responding to questions on the current situation in Maldives.

The spokesperson, however, did not weigh in on former Maldivian president Mohamed Nasheed seeking military intervention from India.

Nasheed yesterday had asked India to play its role of 'liberators' and intervene militarily to resolve the ongoing political turmoil in Maldives.

"We are troubled by reports that Yameen has declared a state of emergency, which gives sweeping powers to security forces to arrest and detain suspects, bans public gatherings, imposes travel restrictions, and suspends parts of the Maldivian Constitution," he said.

Asserting that the US stands with the people of Maldives, the State Department spokesperson said Yameen, the army and police should respect the Maldives' international human rights obligations and commitments.

Meanwhile, UN High Commissioner for Human Rights Zeid Ra'ad Zeid Al Hussein said the declaration of the state of emergency in the Maldives and the resulting suspension of constitutional guarantees have swept away the checks and balances and separation of powers necessary in any functioning democracy.

He warned that this could potentially lead to a greater number of violations of the rights of people in the Island country.

"The suspension of several functions of the judiciary and Parliament, and the restrictions on a series of constitutional rights, create a dangerous concentration of power in the hands of the President," he said.

The Organisation of Islamic Cooperation (OIC) said it remains deeply concerned over the escalating tensions and the resultant law and order situation in Maldives.

In a statement, it called on all parties to respect the rule of law, independence of the judiciary and to take into account the overall interest of their country to avoid any untoward incident, which could undermine the peace and stability in the country.

The OIC also stressed the need for a peaceful settlement of the ongoing political crisis in line with the constitutional provisions. -- PTI