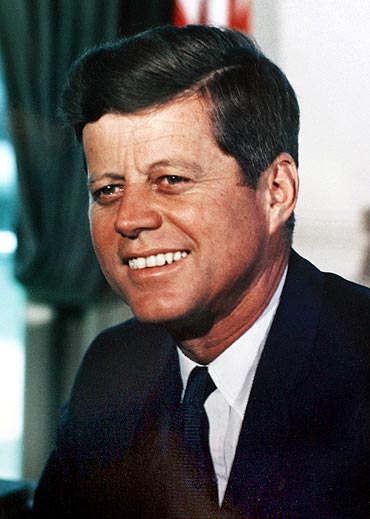 A cream-coloured silk scarf belonging to former US President John F Kennedy has been sold for USD 6,490 at an auction in the US. The scarf from A Sulka & Company was worn by Kennedy during his tenure as a congressman and into his early senatorial career.


It has an attractive herringbone pattern, classic black- and-tan fringe ends, and an embroidered open monogram bearing Kennedy's initials, "JFK." An accouterment of his classic style, this is an exquisite scarf sported by Kennedy as he strolled the chilly sidewalks of Boston during the early 1950s, according to US- based RR Auction.


The Sulka brand became synonymous with the style of the upper crust and political elite, and long served as the go-to haberdashery for the likes of the Duke of Windsor, Winston Churchill, Henry Ford, and Clark Gable, among others.  -- PTI
« Back to LIVE
Business emailOffice email AppDomain registrationWebsiteRediffmailMoneyCompany emailOnline ShoppingBooksGiftsVideosBlogsBuzz