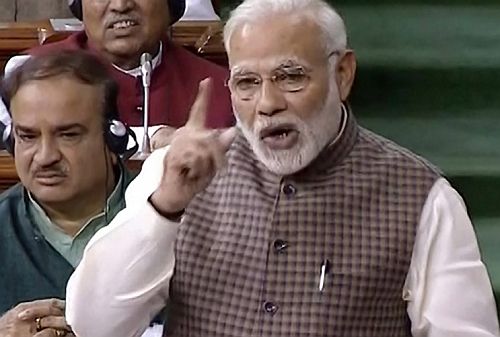 
According to sources, it was Congress president Rahul Gandhi who came up with the idea of protest based on "guerrilla-style" war technique.


Congress MPs were asked to reach Lok Sabha by 12 noon. While former Congress president Sonia Gandhi was a bit hesitant, Rahul Gandhi gave his nod to his 'generals' to raise issue-based slogans.


While former Congress president Sonia Gandhi was a bit hesitant, Rahul Gandhi gave a green signal to his generals to go all out and raise 'issue-based' slogans. The entire plan was executed by Jyotiraditya Scindia, the party's whip in Lok Sabha.


The moment Congress MPs started raising slogans and holding paper placards, which were printed in Congress' parliament office, other Opposition parties too joined them.


Interestingly, while Congress MPs were busy shouting slogans, it was Sonia Gandhi who ensured that MPs throats didn't become sore.


"It was Soniaji who passed us toffees to prevent our throats from becoming sore," a Congress leader said.Rahul Gandhi was clear on what sort of slogans should be shouted.


"There was clear instruction that we raise slogans related to issues and not make personal jibes at the PM," Congress MP from Supaul Ranjeet Ranjan, who shouted the most, said.