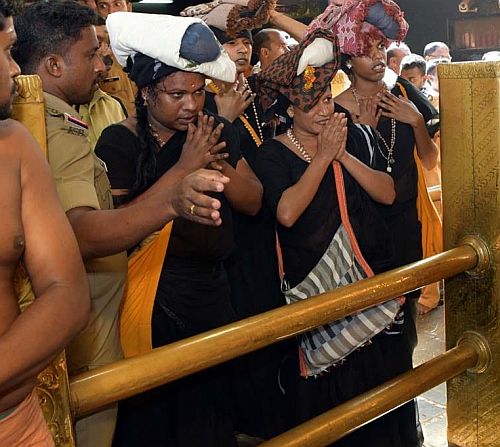 Four transgenders, who were earlier stopped from proceeding towards the Lord Ayyappa temple, Tuesday offered prayers at the hill shrine under a heavy police security cover.


Ananya, Trupti, Renjumol and Avanthika, clad in traditional black sarees and carrying the customary "Irrumudikettu"(sacred offerings to the deity), were escorted by police from Nilackal to Pamba and during the trek to the shrine. They said they were extremely happy to have got the opportunity to offer prayers at the temple and that this was their life's mission which had been realised.


They had met DGP A Hemachandran, a member of the Kerala High Court-appointed supervisory panel, and Inspector General of Police Manoj Abraham here Monday after which they were allowed to proceed. -- PTI
« Back to LIVE