« Back
Rahul should support Ram temple to honour his Brahmin credentials: Bharti
December 06, 2018  22:56 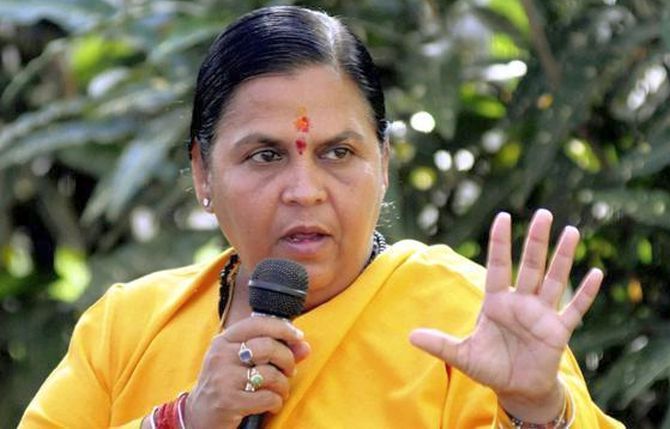 Union minister Uma Bharti on Thursday appealed to Congress president Rahul Gandhi to honour his 'Brahmin credentials' by supporting the construction of a Ram temple in Ayodhaya.
Describing the Congress as 'obstructionist' in construction of the temple, Bharti said the party is trying to 'disturb' the atmosphere and is playing vote bank politics on the issue.
Bharti's remarks came on the 26th anniversary of the Babri mosque's demolition in Ayodhya by Hindutva activists in 1992.
"For the sake of his janeu -- a sacred thread wear by Hindus -- and to honour his credentials, Rahul Gandhi should come forward and support the construction of a Ram temple in Ayodhaya.
"He should convey it to Prime Minister Narendra Modi that he will support ordinance on this issue," Bharti told reporters.
The Congress has described Gandhi-scion as 'janeu-dhari Hindu' (one who wears sacred thread).
Similarly, last month a priest at Pushkar in Rajasthan said his gotra is Dattatreya Kaul brahmin.
Noting all these developments, Bharti said she is hopeful about him on this issue as for the first time the Congress is telling its chief 'janeu-dhari' Hindu and Dattaterya Kaul brahmin.
"He undertook a pilgrimage to Kailash Mansarovar. His party is saying he is a Lord Shiv devotee, if it is really so then he should support the construction of the temple," she said.  -- PTI
« Back to LIVE