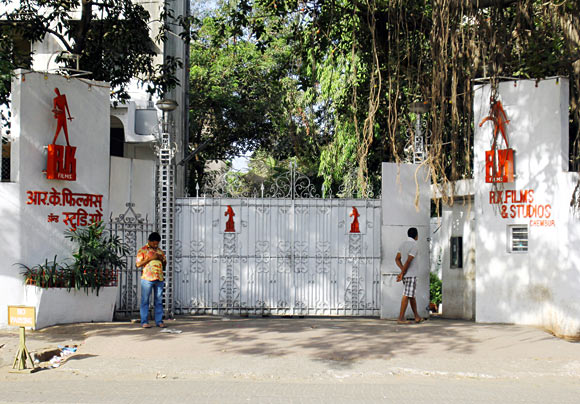 The Kapoor family has decided to sell off the landmark RK studio -- 70 years after it was established -- as it was not "economically viable" to rebuild it after it was gutted down in a fire last year.
Founded by legendary actor Raj Kapoor in 1948 in suburban Chembur, the studio witnessed several films made by the Kapoor family over the decades.
On September 16 last year, a major fire broke out on the sets of dance reality show Super Dancer at the studio in which its ground floor was gutted.
No casualty was reported in the mishap.
While Rishi Kapoor had earlier expressed a desire to rebuild the studio with "state-of-the-art technology", his brother Randhir said it was not practical.
"Yes we have taken the decision to sell RK Studio. It is already up for sale. After the fire that broke at the studio it was not viable to build the studio again... It was not economically viable to do it again," Randhir told PTI.
The films made under the RK banner include Aag, Barsaat, Awaara, Shri 420, Jis Desh Mein Ganga Behti Hai, Mera Naam Joker, Bobby, Satyam Shivam Sundaram, Ram Teri Ganga Maili, among others.
The last film made under the banner was Rishi Kapoor-directed Aa Ab Laut Chalen.
When Raj Kapoor passed away in 1988, his elder son Randhir took over the studio. Later, his younger brother Rajiv Kapoor directed Prem Granth. -- PTI
« Back to LIVE

India's economy grew by 6.3 per cent in the second quarter of the current fiscal, official data released on Wednesday showed.

The famous win also kept the five-match series alive with Australia leading 2-1. India had lost 4-5 and 4-7 in the first two Tests.

On Tuesday, the AIIMS also issued a statement that the e-hospital data has been restored.

'LGBTQ community can visit Qatar, but don't try to change us'

3 Yuvraj Pix You Must See!

'Here's to all the moments big and small that have made our love stand tall'.