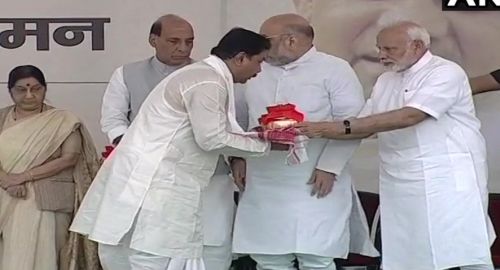 Prime Minister Narendra Modi and BJP chief Amit Shah today handed over urns containing ashes of former prime minister Atal Bihari Vajpayee to state unit chiefs of the party who will take out processions with it to mark the legacy of the popular leader.


The state unit heads of the BJP along with the union ministers from their respective states were assigned to carry out the 'Asthi Kalash Yatra' in all states to immerse the ashes in holy rivers.


The urns carrying the ashes of Vajpayee were handed over by Modi and other senior leaders of the BJP to party's state unit chiefs in a programme organised at the BJP's old head office here.


The party had decided to undertake the 'Asthi Kalash Yatra' in all the states of the country, so that all the citizens could offer their tributes to the popular leader, Shah tweeted.


The BJP decided to take out the yatras in all districts, the party leaders said. The yatra was being organised as party workers and people in the country wanted to pay tributes to Vajpayee, who died last week after a prolonged illness at the age of 93, they said. Processions will start from today from state capitals and pass through all blocks, they added -- PTI

Image: PM Modi hands over an urn containing Atal Bihari Vajpayee's ashes to a state unit chief
« Back to LIVE