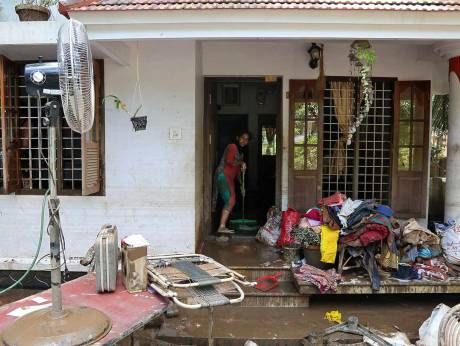 Volunteers engaged in relief work in rain-hit regions here say houses, flats and shops affected by the floods resembled a 'battlefield' and it is "a very big challenge" to restore them.


MLAs Hibi Eden and M Swaraj said volunteers and officials could not open many homes as they were filled with carpet of slush and debris dumped by the floods.


"The houses hit by floods look like battlefields. It will take some time for the people to rebuild their lives," Eden, a Congress MLA, said while taking part in rehabilitation activities at Cheranellore Panchayat which falls under his Ernakulam constituency.


"Cleaning of flood-hit houses, shops and flats is a very big challenge because you are welcomed there by knee-deep slush and reptiles including venomous snakes," Swaraj, a CPI(M) MLA representing Thrippunithura constituency, said.


He has been involved in cleaning work with party colleagues and volunteers in nearby Aluva, one of the worst affected areas situated on the bank of Periyar river. Eden said the house of a poor man in Cheranellore collapsed when its door was opened for cleaning. Many of the houses of the poor are not safe as the floods have weakened their walls and roofs, he added. He also said carcasses of animals like cows, goats and dogs killed in the floods were also lying unattended, posing health risks.


According to the Disaster Management State Control room, 231 people have lost their lives and 32 are missing in rain-related incidents since August 8. Nearly 14.50 lakh people from 3.91 lakh families are still in about 3,879 relief camps across the state. -- PTI


Image: A woman cleans mud from the entrance of her house Paravur in Kerala: Picture: Reuters
« Back to LIVE