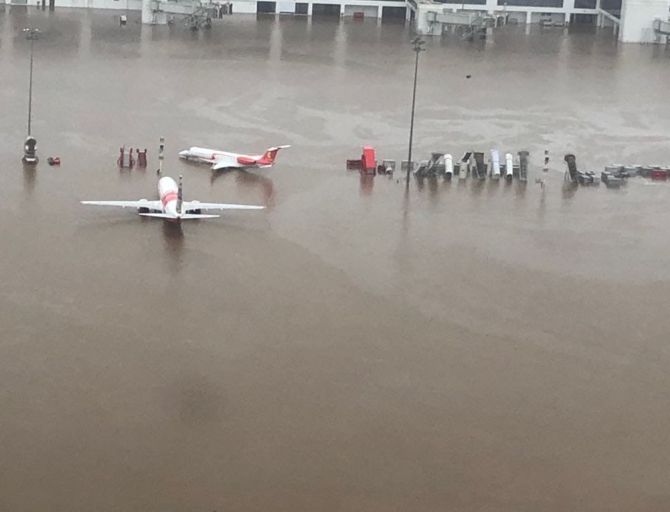 Flight operations from the flood-hit international airport in Kochi, which was rendered non functional for over a week, will resume from August 29 instead of August 26 as announced earlier.
The decision to extend the date was taken at a meeting at Cochin International Airport Limited in Kochi, where most stakeholders, including airlines and ground handling agencies, expressed concern over mobilising manpower by that date, a CIAL spokesperson said.
The meeting, held to review damage control activities,was informed that 90 per cent of staff have been affected by the floods and are out of station.
Nearby hotels, restaurants and eateries still remain closed.
'As central Kerala was yet to recover from post-flood trauma, it is a daunting task to arrange local commutation, logistics of catering items, which will cause a cascading effect on passengers.
'In view of these apprehensions, CIAL decided to extend the date of resuming operations for three more days.We will be starting all operations at 2 PM on August 29,' the spokesperson said in a release in Kochi.
CIAL, among the busiest in the country, suffered an estimated loss of over Rs 220 crore due to the floods and was rendered non-functional since August 14.
The CIAL management has launched rebuilding of the damaged infrastructure, including 2.6 km long airport walls that collapsed after the Periyar river overflowed.
Airport officials had said the runway, taxi bay, duty free shops and other areas of international and domestic terminals were submerged, causing damage to electrical equipment, including runway lights.
The solar power system of the world's first solar powered airport has also suffered damage in the floods, they had said.
Meanwhile, the Naval Air Station, INS Garuda, commenced civil aircraft operations from Monday.
The devastating deluge left 231 people dead over the past15 days and displaced over 14 lakh people.  -- PTI
« Back to LIVE