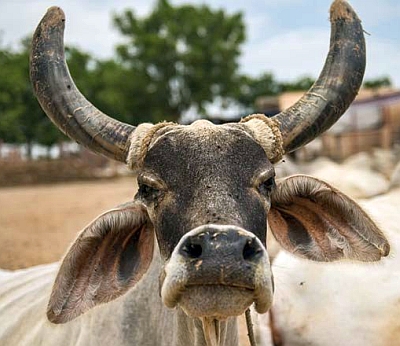 Villagers attacked a group of policemen when they tried to prevent illegal cow slaughter on Eid ul-Azha today in Jharkhand's Pakur district, leaving four cops injured, officials said.
Cow slaughter has been banned in Jharkhand since 2015.
The state government had on August 18 directed deputy commissioners of all districts to ensure that cattle is not slaughtered on Eid ul-Azha.
Replying to a query, the DIG, Santhal Paraganas, Raj Kumar Lakra, said cow slaughter had occurred in the village.
He told PTI that a police team had rushed to Dangapara village under Maheshpur Police Station of the Pakur district following a tip-off about cattle slaughter and faced brickbatting by the villagers.
Four policemen suffered minor injuries and were taken to a nearby primary health centre.
Doctors referred them to the Pakur sadar hospital for better treatment, he said. Police retaliated by bursting tear gas shells to disperse the mob.
"We had received a call informing that cattle were being slaughtered and accordingly dispatched a police team. As soon as the team reached the spot, villagers started brick batting, forcing the police to lob tear gas shells to disperse the mob," Additional Director General of Police R K Malik said.
Senior police officials, including Deputy Commissioner D K Jha and Superintendent of Police Shailendra Prasad Burnwal, were camping at the spot to take stock of the situation.
"Other details are awaited," Malik added.  -- PTI
Image only for representation.