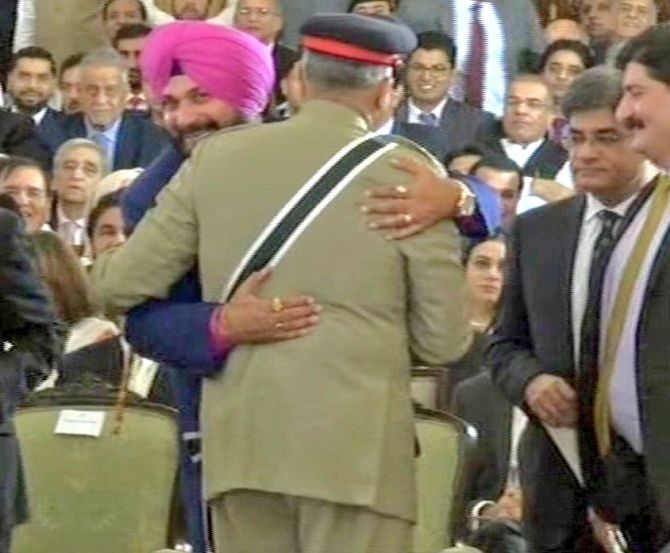 Punjab cabinet minister Tripat Rajinder Singh Bajwa today suggested his ministerial colleague Navjot Singh Sidhu 'say sorry' to the families of slain soldiers for upsetting them by hugging the Pakistan Army chief.
He asserted that the families of soldiers who died in the line of duty were justified in expressing their displeasure over the cricketer-turned-politician's hug.
"Sidhu sahab is my senior colleague. I cannot dictate him. I can only suggest that he can gracefully say sorry to the families of martyrs who expressed unhappiness (over embracing the Pakistan Army chief). I think there is no harm in saying sorry. He is a wonderful person and a senior minister," Bajwa said in Chandigarh.
Sidhu was widely criticised for hugging the Pakistan Army chief during his visit to Pakistan to attend the swearing-in ceremony of Pakistan Prime Minister Imran Khan.
However, Bajwa said, 'a friend had invited a friend' and there was no 'crime' in Sidhu going to attend the ceremony in Islamabad.
The statement by the senior minister comes after Chief Minister Amarinder Singh ticked off Sidhu for hugging Gen Qamar Javed Bajwa.
Earlier, the CM had said, "It was wrong for him (Sidhu) to have shown the affection he did for the Pakistan Army chief. I am not in its favour...the fact is that the man (Sidhu) should understand that our soldiers are being killed everyday. My own regiment lost one Major and two jawans a few months ago."
Meanwhile, Punjab Congress chief Sunil Jakhar came out in defence of Sidhu again while describing the latter's Pakistan visit as a 'manufactured controversy'.
"It is a manufactured controversy. I want to say that one should talk on issues instead of discussing individuals. The issue was opening the corridor to the historic Gurdwara Kartarpur Sahib (in Pakistan). Sidhu raised this issue in Pakistan," Jakhar said.
The Gurdaspur MP also asked the Bharatiya Janata Party not to adopt 'double standards' on this matter while citing the invitation extended to the then Pakistan President Pervez Musharraf, who was the mastermind of Kargil war, to Agra in 2001.
Yesterday, Sidhu had defended hugging Pakistan's Army chief in Islamabad, and had slammed the BJP's 'double standards', reminding it of peace visits to Pakistan by Atal Bihari Vajpayee and Narendra Modi.
He had said hugging Gen Qamar Javed Bajwa at the swearing-in was an 'emotional response' on learning that Sikh pilgrims might be allowed to visit the Kartarpur shrine across the border.  -- PTI
« Back to LIVE