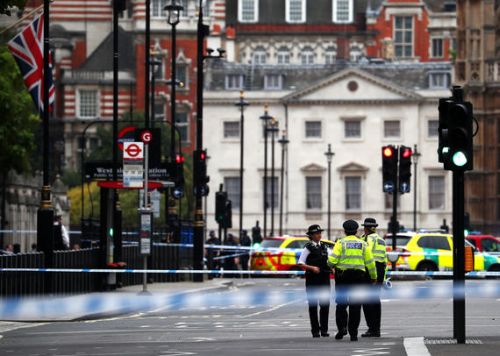 The driver of car which crashed outside parliament arrested on suspicion of terrorist offences, reports the Independent.  A number of pedestrians were injured when a car crashed into the security barriers outside the UK's Parliament building today, Scotland Yard said as armed police quickly arrested the male driver.


The incident happened at 07:37 am (local time), prompting a major police response. Armed officers from Scotland Yard were at the scene instantly and one man has been arrested.


"At 0737 hrs today, a car was in collision with barriers outside the Houses of Parliament. The male driver of the car was detained by officers at the scene, the Met Police said in a statement.


A number of pedestrians have been injured. Officers remain at the scene, it said. The area around Parliament Square has been cordoned off as investigations continue.


A car was seen crashed into the large steel barriers that are erected around the Houses of Parliament complex in Westminster.


Witnesses said they saw the car crash into the barriers deliberately. Heavy armed police presence could be seen in the area as the incident unfolded.
« Back to LIVE
Business emailOffice email AppDomain registrationWebsiteRediffmailMoneyCompany emailOnline ShoppingBooksGiftsVideosBlogsBuzz