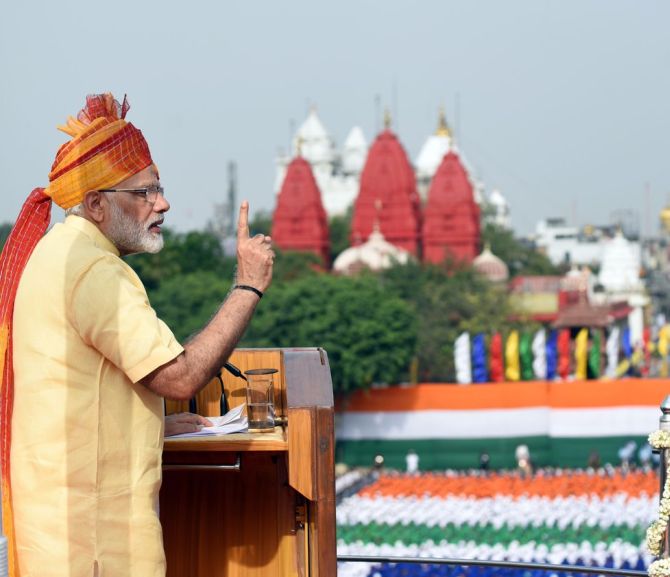 The historic Red Fort, from where Prime Minister Narendra Modi will address the nation on the 72nd Independence Day tomorrow, has been put under a heavy security cover, along with other critical areas in the national capital. Police are on high alert in the wake of an attack on JNU student leader Umar Khalid in the Lutyens' Delhi area yesterday and the incident in the UK, in which a car crashed into the security barriers outside the Parliament building today, a senior police officer said.

While nearly 70,000 Delhi Police personnel are guarding the national capital, close to 10,000 cops have been deployed at the Mughal-era fort, which will see the presence of senior ministers, top bureaucrats, foreign dignitaries and common people during the PM's address tomorrow.


Delhi Police personnel have been specifically asked to keep an eye on the sky to ensure that no stray kites are seen in the areas around the Red Fort.


Last year, when the prime minister was addressing the nation on Independence Day, a black kite had landed below the podium. The kite landed quietly without causing any disturbance and the prime minister had continued his address unfazed. Kite-catchers have been deployed even though kite-flying has been restricted in the area till 11 am.


Over 500 CCTV cameras have been installed on the routes leading to the Red Fort with over 200 cameras in the fort itself. The footage is being monitored round the clock, police said.


This time, 36 women personnel of the Delhi Police Special Weapons And Tactics (SWAT) unit will also be guarding the venue with their male counterparts.


Police have already carried out anti-sabotage checks in the area and visited hotels in the vicinity in search of suspicious elements, officials said, adding that a security audit of the residents, including tenants, has been completed.


At the Red Fort, a special team of NSG snipers and commandos will form the inner layer of the security cordon, while anti-aircraft guns have been deployed to thwart any aerial intrusion by objects like drones and projectiles, senior police officials said.


Delhi Police has already prohibited aerial activities, including para-gliding, flying UAVs and hot air balloons, across the city. The buildings facing the Red Fort will be secured by police and paramilitary personnel.


Security along the route to be taken by the Prime Minister's cavalcade, from his official residence to the Red Fort, will be monitored with the help of hundreds of CCTV cameras.


Special "spotters" of Delhi Police and the paramilitary will keep an eye on parking areas. Sniffer dogs will also be part of the extensive security deployment.


According to a statement by the Delhi Metro Rail Corporation, train services will run as usual. However, stations like Lal Quila, Jama Masjid, Delhi Gate and ITO will have restricted entry and exit during the ceremony owing to security considerations. Parking will not be available at the stations till 2 pm tomorrow in view of the security measures, the DMRC said. -- PTI
« Back to LIVE

'The reality is no one, including some of the names that have shown up in the last few weeks, have any unilateral decision-making power in this,' Facebook India MD Ajit Mohan tells Peerzada Abrar.

New dates to be announced shortly, the RBI said.