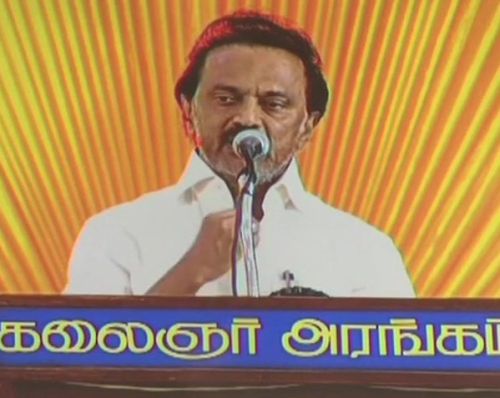 The DMK paid rich tributes today to its departed President M Karunanidhi, hailing his contribution to various sectors in the state and the country.


A special meeting of the party's Executive Committee under working president M K Stalin heaped praises on the late party chief. The party recalled his contribution towards social justice, industrialisation, upholding regional autonomy and his role in various national events. Party leaders observed a two-minute silence as a mark of respect to the departed soul.


"Party has lost our leader but I have lost the leader as well as my father,  Stalin said. "When Kalaignar was in his last stage I held CM's hands and pleaded to fulfill his (Karunanidhi) last wish to be buried in Marina Beach but govt didn't agree," he said.


Stalin and senior leaders were present at the "emergency" meet, convened to condole the passing away of the Dravidian stalwart in Chennai. After battling for life in a private hospital for about 10 days, Karunanidhi had breathed his last on August 7.
« Back to LIVE
Business emailOffice email AppDomain registrationWebsiteRediffmailMoneyCompany emailOnline ShoppingBooksGiftsVideosBlogsBuzz