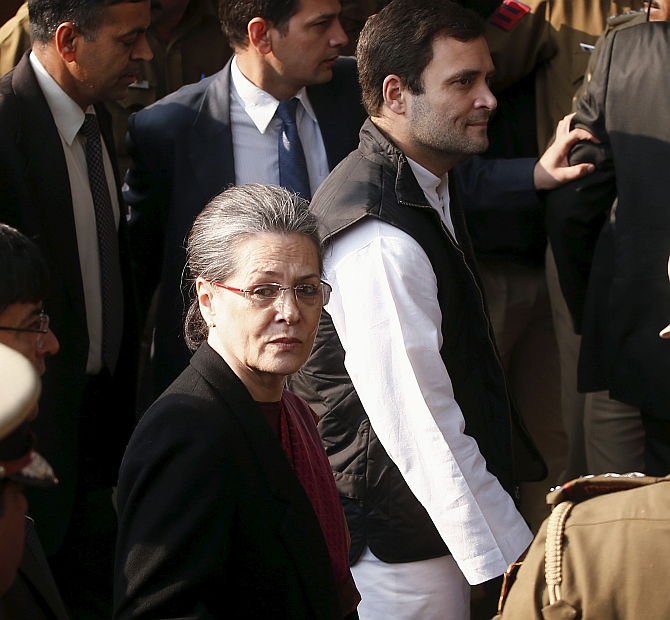 Former Congress president Sonia Gandhi today told the Delhi high court that the tax department has 'wrongly invoked and applied' the formula for calculating her tax liability after reopening her assessment for the year 2011-12.
The contention on behalf of the Congress leader was made before a bench of justices S Ravindra Bhat and A K Chawla by senior advocate P Chidambaram.
"They have not applied the formula correctly. The formula was wrongly invoked and wrongly applied. I received nothing except 1,900 shares in the company," the lawyer said.
Another objection raised by him was that the debt of Rs 90 crore bought by Young Indian from Associated Journals Ltd (AJL), which owns National Herald newspaper, was converted into equity and this would not result in any income which was taxable.
The lawyer further said even if the equity resulted in taxable income, it would not go into the hands of Young Indian's (YI) shareholders like Sonia Gandhi, her son Rahul Gandhi and party leader Oscar Fernandes, all of whom have challenged reopening of their tax assessments for the same year, 2011-12.
He said that banks often convert the debt they acquire into equity and this does not result in income in the hands of the bank or its shareholders.
YI, which was incorporated in November 2010 with a capital of Rs 50 lakh, had acquired almost all shareholdings of the AJL, which owns the National Herald newspaper. In this process, YI had also acquired AJL's debt of Rs 90 crore.
After hearing part arguments, when the court said it will issue a formal notice, Additional Solicitor General (ASG) Tushar Mehta said there was no need for it as he was present in the court.
The court, thereafter, listed the matter for further hearing on August 16, when the ASG will argue in defence of the action taken by the tax department.
The court said once it reserves its judgement on conclusion of the arguments, it will ask the tax department not to take any coercive steps till the verdict was pronounced.
Senior advocate Arvind Datar, appearing for Rahul Gandhi, said that arguments during the hearing may be reported and urged the court to order that confidentiality be maintained regarding the contents of the petitions.
However, the bench declined to issue any such direction saying 'we cannot go into all this' as it would be akin to going on a 'wild-goose chase'.
During the over an hour-long hearing, Chidambaram said, "When debt is converted to equity, it does not result in any income and, even if it does, it would not result in income for the shareholder."
He further said that even if it was accepted that income was generated, "It cannot be the income of YI and its shareholders in the same assessment year of 2011-12."
He also questioned how a debt of Rs 90 crore which was converted into equity acquired a value of Rs 407 crore as claimed by the tax department.
He said that YI being a section 25 company, a non-profit entity, it cannot give anything to its shareholders.
"To say that I got something from YI is an oxymoron," he said.
He also termed as 'incorrect' the tax department's claim that Rs 90 crore loaned to AJL, leading to the debt, was bogus or paper loan, saying this is not correct as the amount was loaned through 137 cheques issued over a 9-10 year period.
Among other objections raised by him against the reopening of the assessment was that the communication sent to his client informing about the development was not digitally signed.
The assessment was reopened in March 2018 on the orders of a senior officer who was monitoring the case from 2014, he said.
Rahul Gandhi's plea was taken up by the court on August 8 when it had rejected the oral plea of his lawyers to prohibit the media from reporting or publishing the court proceedings.
Tax department has claimed, Rahul's assessment for 2011-12 was reopened as he had not disclosed he was a director in YI since 2010.
IT had said the shares Rahul has in YI would lead him to have an income of Rs 154 crore and not about Rs 68 lakh, as was assessed earlier.
Rahul's lawyers had said the query put to their client during the scrutiny of his assessment was whether he had any interest in any company or a sister concern and not if he was a director in any entity.
He had replied in the negative as YI was a Section 25 company, a non-profit entity, and hence no director would have any interest in it, the lawyers had said.
The tax department has already issued a demand notice for Rs 249.15 crore to YI for the assessment year 2011-12.
The IT department's move followed its probe on a complaint alleging that the Gandhis had misappropriated AJL's assets while transferring their shares to the newly formed Young Indian.
BJP MP Subramanian Swamy, in a private criminal complaint filed before a trial court, had accused Sonia and Rahul Gandhi and others of conspiring to cheat and misappropriate funds by paying just Rs 50 lakh, through which the YI had obtained the right to recover Rs 90.25 crore which the AJL owed to the Congress party.
All the accused, also including Motilal Vora, Oscar Fernandes, Suman Dubey and Sam Pitroda, have denied the allegations levelled against them.  -- PTI
« Back to LIVE