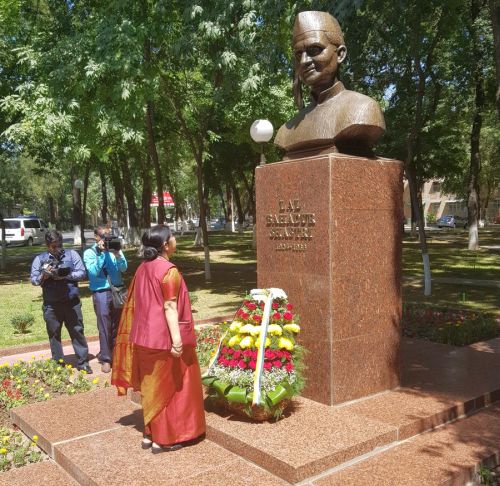 External Affairs Minister Sushma Swaraj paid floral tributes at the bust of India's second prime minister Lal Bahadur Shastri at his memorial in the Uzbek capital today.
Swaraj, who arrived in Tashkent yesterday on her first visit to Uzbekistan, visited the Shastri memorial this morning.
"EAM Sushma Swaraj paying floral tribute to freedom fighter and 2nd Prime Minister of India Shri Lal Bahadur Shastri at his memorial in Tashkent," External Affairs Ministry spokesperson Raveesh Kumar tweeted along with a photograph of the minister.
At the memorial, Swaraj also met with Yakov Shapiro who sculpted the bronze bust of Shastri.
Shastri had died in Tashkent in January 1966 after signing the Tashkent Declaration that formally ended a war between India and Pakistan.
A memorial was built here in his memory. -- PTI
« Back to LIVE