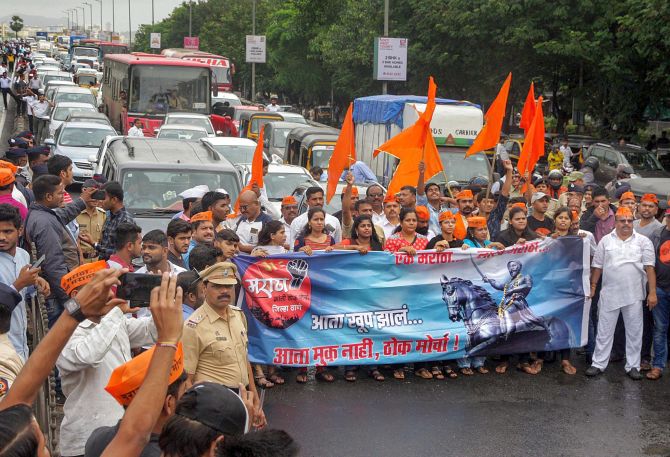 Stating that reservation will not guarantee employment as jobs are shrinking, Union minister Nitin Gadkari on Saturday said there is a 'school of thought' which wants policy-makers to consider the poorest of poor in every community.
Gadkari made the remarks, responding to reporters' questions on the ongoing agitation by the Marathas for reservation and similar demands by other communities in Maharashtra.
"Let's us assume the reservation is given. But there are no jobs. Because in banks, the jobs have shrunk because of IT. The government recruitment is frozen. Where are the jobs?
"The problem with the quota is that backwardness is becoming a political interest. Everyone says I am backward. In Bihar and Uttar Pradesh, Brahmins are strong. They dominate politics. (And) They say they are backward," the senior Bharatiya Janata Party leader said.
"So one school of thought is that a poor is a poor, he has no caste, creed or language. Whatever may be the religion -- the Muslim, the Hindu or the Maratha (a caste), in all communities there is one section which has no clothes to wear, no food to eat.
"One school of thought also is (that) we must also consider the poorest of the poor section in every community," he said.
This is a 'socio-economic thinking' and it must not be politicised, the Union minister said.
Maintaining that Maharashtra Chief Minister Devendra Fadnavis was trying to resolve the Maratha quota demand by holding talks, Gadkari urged people to maintain peace.
"The responsible political parties must not add fuel to the fire," he added.
The development, the industrialisation and the good prices for rural produce would ease the economic distress that the Maratha community is suffering from, he said.  -- PTI
« Back to LIVE

Is Rakhi Sawant the worst captain in Bigg Boss history?

Thinking of taking Covishield? Here's all you need to know

Prior to the beginning of the nationwide vaccination drive against Covid-19 in India on January 16, the Pune-based Serum Institute of India has issued a factsheet to answer frequently asked questions that vaccine beneficiaries might have.

On Lohri, farmers in Delhi to burn copies of new agri laws

Farmers' leader Manjeet Singh Rai said they will celebrate Lohri by burning the copies of farm laws at all protest sites in the evening.

The leg-spinner and YouTube star are currently on honeymoon in Dubai.

IPL to be blamed for India's injury woes in Australia?

Australia head coach Justin Langer on Wednesday hinted that the Indian Premier League could be responsible for the large number of injuries suffered by India in the ongoing four-match Test series.