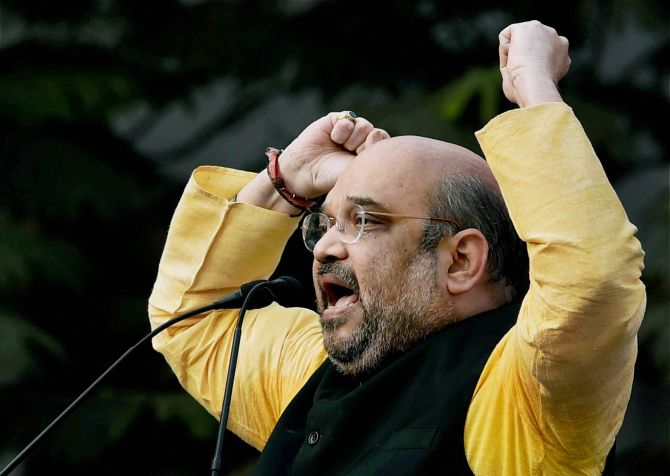 Bharatiya Janata Party chief Amit Shah on Sunday dared the Congress to clear its stand in the Rajya Sabha on the amended OBC bill, saying it will expose whether the party was really for the backward communities.
At the same time, he charged the opposition with playing vote bank politics on the National Register of Citizens issue.
The Constitution (123rd Amendment) Bill, 2017, commonly known as OBC bill, was passed in the Lok Sabha on August 2 and will now go to the Rajya Sabha for passage.
The proposed legislation seeks to grant the National Commission for Backward Classes constitutional status on a par with National Commissions for Scheduled Castes and Scheduled Tribes.
"The Modi government has got the OBC bill passed in the Lok Sabha. This will go to the Rajya Sabha. Will (Congress president) Rahul Gandhi clear his stand before the country that whether his party will help in the passage of the bill in the Rajya Sabha or not. This will make it clear whether the Congress was really for the welfare of the backward," Shah said.
He was in Uttar Pradesh's Chandauli to attend a function on renaming of Mughalsarai junction after Rashtriya Swayamsevak Sangh stalwart Pt Deendayal Upadhyay.
On the NRC issue, the BJP chief said, "We have to push out each and every Bangladeshi infiltrator from the country."
"Mamata Banerjee and the Congress say that the NRC should not be done. I ask Rahul baba whether the NRC should be conducted in the country or not. But, he does not answer. You all should tell that whether the Bangladeshi infiltrators should be pushed out (from India) or not."
"Today I would like to ask the SP, the BSP and the Congress whether they want the infiltrators to stay in the country or they should be driven out. I know the answer of the people of UP. The answer is that not even a single infiltrator should be allowed to stay in India," he said.
« Back to LIVE