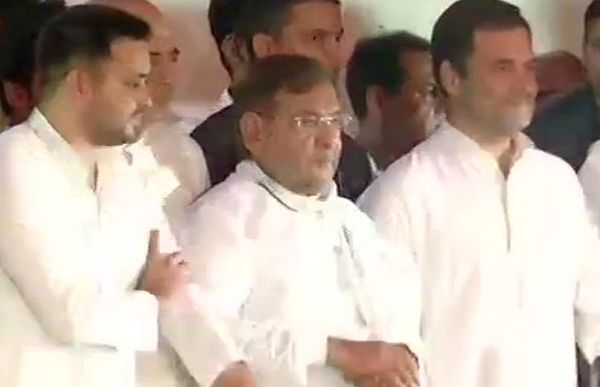 Congress chief Rahul Gandhi joined the protest called by Rashtriya Janata Dal leader Tejashwi Yadav to demand the resignation of Bihar Chief Minister Nitish Kumar after several cases of alleged sexual exploitation in various state-run shelter homes were reported.
"Leaders from many parties will be a part of our protest," Tejashwi said.
Eleven employees of a child shelter home in Muzaffarpur were arrested on July 24 for allegedly sexually harassing the inmates.
After receiving information, the police raided the vicinity and rescued 44 girls.
On Thursday, the Supreme Court also took suo motu cognizance in the Muzaffarpur shelter home case.
The chorus for Nitish Kumar's resignation has grown after a photo of the owner of the shelter home, Brajesh Thakur being felicitated by the chief minister emerged.
Thakur is the prime accused in Muzaffarpur's shelter home case, where more than 30 minor girls were sexually assaulted over a period of time.
-- ANI
« Back to LIVE