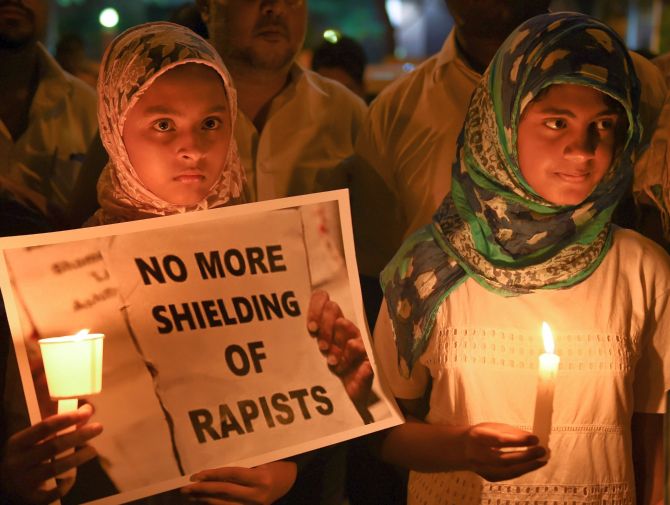 The Jammu and Kashmir Crime Branch will soon approach a local court in Kathua against a defence lawyer who is allegedly circulating "twisted facts' in the case of the gangrape and murder of an eight-year-old girl to vitiate the atmosphere, officials said today.


The police has taken cognisance of a CD in which a witness is seen as saying that he had been coerced by the Crime Branch to give a statement against Vishal Sharma, one of those alleged to have raped the child, officials said.


Sharma is the son of Sanji Ram, alleged to be the main conspirator in the case that has outraged the nation. The CD, which has gone viral on social media, was passed off by the lawyer as a statement that the witness had given in front of the magistrate, the officials said.


However, initial investigations showed that it was prepared outside the court premises by the lawyer to mislead the public and create disaffection towards the government, they said.


"This is definitely an attempt to browbeat the witnesses in the case and we have to immediately step in keeping in mind the sensitivities attached with the case," an official said.


According to investigations, the girl from a minority nomadic community was allegedly kidnapped at the behest of Sanji Ram, who wanted to scare away the Gujjar and Bakherwals communities which would migrate to the village, about 90 km from Kathua in winter.


She was allegedly held in captivity in a small village temple in Kathua district for a week in January this year during which she was kept sedated and sexually assaulted before being bludgeoned to death.


On January 23, the government handed over the case to the Crime Branch of the state police, which formed a Special Investigation Team and arrested eight persons.


The Crime Branch filed two separate chargesheets -- a separate chargesheet was filed for the juvenile -- before the chief judicial magistrate in Kathua on April 9 and 10 despite protests by local lawyers, who demanded that the case be handed over to the CBI for a "fair probe'.


The accused pleaded not guilty on the opening day of the trial in the principal district and sessions court on April 16. The court posted the next hearing in the case for April 28. PTI
« Back to LIVE
Business emailOffice email AppDomain registrationWebsiteRediffmailMoneyCompany emailOnline ShoppingBooksGiftsVideosBlogsBuzz