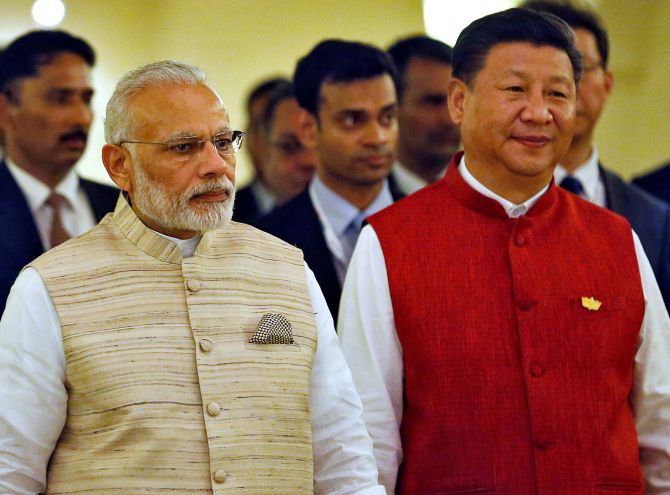 The Doklam standoff happened due to 'lack of mutual trust' between India and China, and they need to work together to create favourable conditions and gradually settle the boundary issue, a top Chinese diplomat said today, ahead of this week's informal summit between Prime Minister Narendra Modi and Chinese President Xi Jinping.

Indian and Chinese troops had been locked in a stand-off for over two months last year in the Doklam area near Sikkim before 'disengaging' on August 28.

The area of the standoff is also claimed by Bhutan.

"The boundary incident that happened (at Doklam) last year someway reflected lack of mutual trust between the two countries," Vice Foreign Minister Kong Xuanyou told the media when asked about the Doklam standoff.

Asked whether the Doklam standoff and the boundary issue will figure in the talks between Prime Minister Modi and President Xi, Kong said the two leaders decided to hold informal summit 'because both the countries attach great importance to each other in external strategy, not because of the boundary question that still remained unresolved, that we need to talk about it during the informal summit'.

India-China boundary dispute spans to 3,488-km along the Line of Actual Control (LAC).

Both sides have held 20 rounds of talks between the Special Representatives to resolve it.

"Of course, the boundary question is important. Both sides need to work together to create favourable conditions and gradually settle it. Proper settlement of boundary question will help deepen cooperation and deepen mutual understanding and trust between the two countries," Kong said.

He said both China and India needs to even make greater efforts to deepen their mutual trust.

"At the informal summit, the two leaders will have heart-to-heart discussions on the issues of overarching, long-term and strategic importance to bilateral relations. In terms of some specific differences or sensitive issues, the two sides will stay in touch with each other through relevant channels. In the process of deepening mutual trust, they will gradually find a way to try to settle them," he said.  -- PTI
« Back to LIVE
Business emailOffice email AppDomain registrationWebsiteRediffmailMoneyCompany emailOnline ShoppingBooksGiftsVideosBlogsBuzz