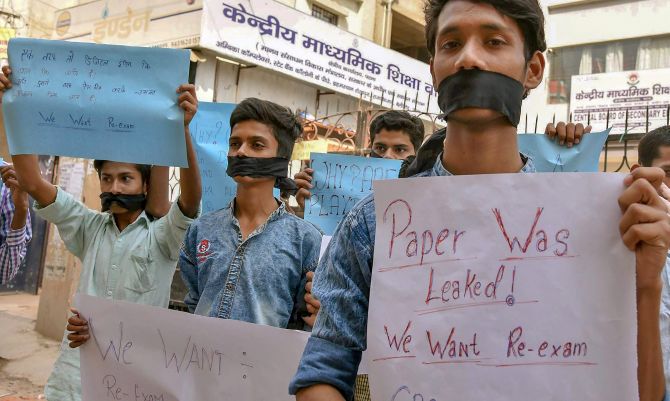 The Central Board of Secondary Education will conduct a re-test of Class 12 economics paper tomorrow, nearly a month after it was leaked triggering widespread outrage and confusion among students across India.

After reports of the leak surfaced on March 28, the CBSE announced it will re-conduct the examination on April 25.

Then, there were also reports of the CBSE's Class 10 mathematics paper being leaked, but the board decided against a re-test of the Class 10 paper, saying the examination was 'largely an internal segment' of the school education system.

"The candidates will appear (for the exam) from the same allotted centres using the same admit card," a board official said today.

For conducting the re-test of the economics paper, the board had said 'Class 12 exams are a gateway to higher education and various professional competitive exams which have limited seats... Therefore, giving undue advantage to a handful of beneficiaries of the alleged leak of the economics paper would not be in larger interest of the students'.

Earlier this month, the CBSE had said it found no impact of the Class 10 mathematics paper leak after an assessment.

The reports of leak of the CBSE papers had caused disappointment among students across the country last month.

In Delhi, students held protests, accusing the CBSE of negligence and demanded immediate action against the guilty.

Investigators made arrests in several parts of the country in connection with the case, including in Jharkhand and Himachal Pradesh.

They claimed to have arrested the main conspirators behind the leak from Una town in Himachal Pradesh.

The three people were staffers at a school in the town. The Class 12 economics paper was leaked on March 23 - three days before the scheduled date, according to Delhi Police.

The leak was exposed after an envelop containing four images of the hand-written economics paper was delivered to the CBSE Headquarters in Delhi on the evening of the scheduled date of examination -- March 26.

Following the leak reports, on April 2 CBSE tried a 'leak-proof' system of 'encrypted' question papers, which delayed the exam as a few centres in Delhi were unable to follow the printing of encrypted papers, e-mailed to them, at the school itself.

The HRD ministry then set up a committee to examine the process by which the CBSE conducts examinations.

The committee has to submit its report by May 31 to the Human Resource Development Ministry.  -- PTI
« Back to LIVE
Business emailOffice email AppDomain registrationWebsiteRediffmailMoneyCompany emailOnline ShoppingBooksGiftsVideosBlogsBuzz