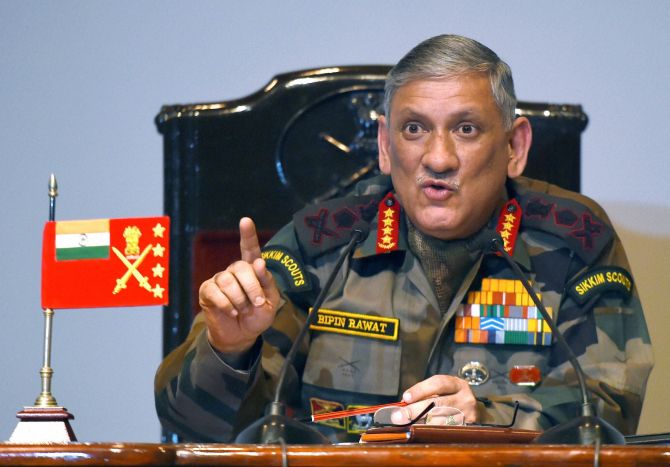 Army chief General Bipin Rawat on Sunday said the radicalised youth of Kashmir would soon realise that the gun was not the solution to their problem as neither the army nor the terrorists would achieve their goals through it.
Peace, he said, was the only way to improve the situation in Kashmir that had been witnessing insurgency for about three decades now.
"There is hope that the situation in Kashmir will improve...it's not gone wrong. There are some youths in Kashmir who have strayed and have been radicalised. They think they can achieve their goal through guns.
"But the time is not far when even they will be convinced that neither the forces nor the terrorists will be able to achieve their goal. We have to together find a way for peace and we will be successful in that," Rawat said.
The army chief was speaking at the 70th foundation day of Jammu and Kashmir Light Infantry regiment.
He said although a section of people in the valley had strayed but that was a "very small" number and majority of people desired peace and believed that they were Indians.
"It is wrong to say that situation in Kashmir has deteriorated. The atmosphere is vitiated but the situation has not deteriorated," he said.
Rawat, who served extensively in Kashmir through his tenure, said the concept of Kashmiryat had to be brought back and the process initiated from the University of Kashmir.
He noted that unity in diversity was the real essence of Kashmiriyat and it is important to inform the youth about it.
"To revive that Kashmiriyat, we need to get our act together. It is not difficult. We have to get our act together, sit down together, work together and make sure that we all get united and bring about peace," he added. -- PTI
« Back to LIVE

With the US education system operating independently from the government, universities are adopting varying strategies when it comes to Covid vaccination.

Want to invest in a Debt Fund?

Compared to equity funds, debt funds are lower risk profile and are usually suitable for investors for very short term.

Reminded me of my mother: Biden on meeting UK's Queen

The US president took part in an Inspection of the Guard of Honor and then joined the queen and first lady to watch a military march. Afterwards, the three went into the queen's apartment for tea, The Hill noted.

offers his take on the constantly zooming fuel prices in the country.