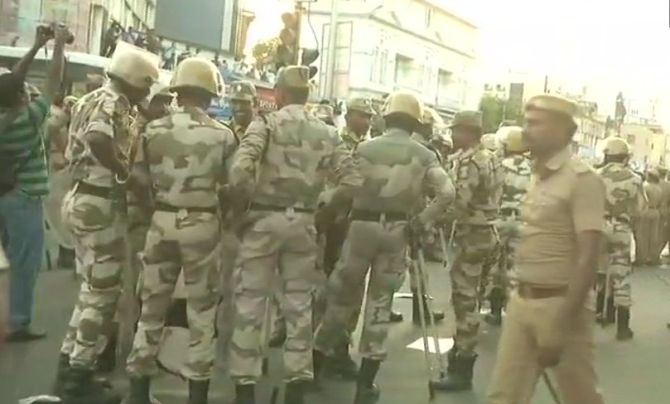 Protests intensified in Chennai today against the conduct of Indian Premiere League matches amid raging Cauvery demonstrations, with police chasing away agitators in some places.

In some places, protesters clashed with police.

The threat of more protests prompted police to step up security for the cricketers, including during their journey to the stadium from their hotel.

The CSK team suffered a slight delay on its onward trip to the stadium for the match due to the disruption.

The Chidambaram stadium has turned into a virtual fortress with 4,000 policemen including commandos and members of the Rapid Action Force deployed for security.

Policemen were seen chasing away protesters on the arterial Anna Salai which bore the brunt as scores of protesters staged agitation on this key road, resulting in traffic snarls.

Some protesters were seen raising slogans against Prime Minister Narendra Modi for not establishing the Cauvery Management Board, an issue on which Tamil Nadu political parties including Dravida Munnetra Kazhagam and other outfits have been agitating for the past one week.

The chairman of IPL today urged the Centre to ensure enhanced security during matches in Chennai in view of  the protests, prompting the Union Home Secretary to ask the chief of the Tamil Nadu Police to do the needful, officials said.

IPL chief Rajeev Shukla met Union Home Secretary Rajiv Gauba and requested him to ensure additional security in and around the Chidambaram stadium amidst fears that protesters demanding the formation of the Cauvery Management Board might disrupt the matches.

"The IPL chairman met the Union home secretary and urged him to do the needful for additional security in the M A Chidambaram stadium in Chennai. Following this, the home secretary spoke to the Director General of the Tamil Nadu Police and asked him to ensure proper security during the match," a home ministry official said.

The home secretary also assured the IPL chairman that foolproof security will be provided for all the matches in Chennai, another official said.  -- PTI
« Back to LIVE